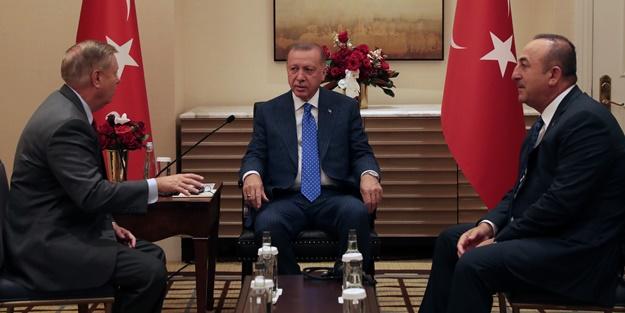 After meeting Turkish president in New York, the Republican Senator Lindsey Graham expressed hope for a more strategic relationship between Ankara and Washington.

Speaking to reporters, Graham said the meeting "was good".

"I am hopeful we can get a more strategic relationship with Turkey [...] try to get them back in F-35 program, maybe talk about free trade program," said Graham. "Because Turkey is a very important ally, not just when it comes to Syria, really for whole region."

In July, the U.S. suspended Turkey’s involvement in a program for F-35 fighter jets, saying its purchase of the Russian S-400 missile defense program could endanger the aircraft, a claim Turkey has consistently denied.

Turkey produces some parts of the F-35 jets and is also a partner in the jet program, and has warned any effort to remove it from the production chain would be very costly.

Graham praised Turkey as "indispensable to keeping Syria together" and its assistance in northeastern Syria to prevent re-emergence of Deash terror group.

"Most importantly, Turkey is protecting 4 million people from slaughter," he added.

On Aug. 7, Turkish and U.S. military officials agreed to set up a safe zone in northern Syria and develop a peace corridor to facilitate the movement of displaced Syrians who want to return home.

They also agreed to establish a joint operations center.