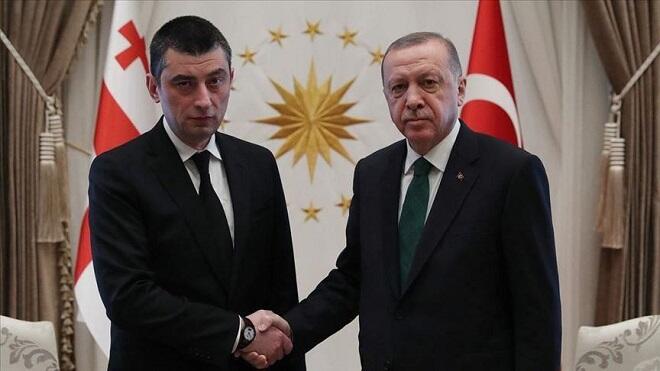 Turkey's president on Thursday praised the country's economic and strategic cooperation with Georgia.

"Unfortunately, our relations that we have maintained at the level of strategic partnership have been suspended. Today, with the instructions we give our foreign ministers, we will convene our strategic cooperation council as soon as possible," Recep Tayyip Erdogan told reporters at the Presidential Palace in capital Ankara.

"The joint energy and transportation projects that we have fulfilled together with our brother Azerbaijan have enabled us to create a zone of stability from the Caucasus to Anatolia," Erdogan said, referring to natural gas and railway projects completed by Turkey, Georgia and Azerbaijan.

Erdogan went on to say that the two leaders confirmed their willingness to increase their trade volume from $1.5 billion as of the end of 2018 to $3 billion.

"Our efforts to maintain peace and stability in our common sea, the Black Sea, continue with the contributions of Georgia. In addition to our military contacts, we hope to establish tighter relations between our defense industry companies," he added.

Georgian Prime Minister Georgi Gakharia said for his part that Tbilisi is committed to further develop the existing strategic partnership.

Stressing that Georgia attaches importance to cooperation on the energy corridor between the two countries, Gakharia said: "Turkey is a way to Europe for Georgia."

Gakharia said at the end of the meeting that he would officially invite Erdogan to Georgia in the near future.