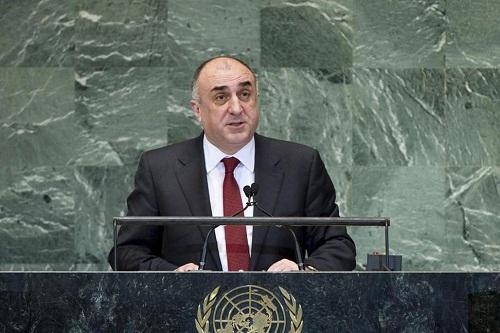 While supporting international peace and security, Azerbaijan is still facing continuous military aggression by Armenia, which resulted in the occupation of 20 percent of internationally recognized territories of our country, including Nagorno-Karabakh and seven adjacent regions.

Axar.az reports Foreign Minister of Azerbaijan Elmar Mammadyarov said speaking at the Meeting of the Organization of Islamic Cooperation Contact Group on Somalia.

He said as a result, 1 million Azerbaijanis became refugees and IDPs, numerous historical, cultural and religious monuments were destroyed.

"Since the very first day at the conflict, combat operations have been conducted exclusively inside the territory of Azerbaijan, almost in the middle of the country, affecting its civilian population and infrastructure.

"Regretfully the continued occupation of Azerbaijani territories by Armenia continues to represent a serious threat to regional and international security and undermines the efforts of my country to utilize its full potential for sustainable development."