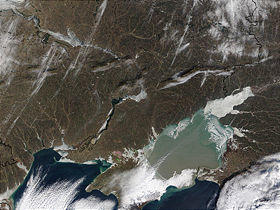 The EU has demanded that Russia ensure unhindered and free passage of ships to the Sea of Azov.

Axar.az reports citing Ukrinform that the European Union also noted that Russia should have returned three Ukrainian ships a long time ago, in particular, "taking into account the ruling of the International Tribunal for the Law of the Sea."

"We remain consistent and persistent in our appeals to Russia to ensure unhindered and free passage to the Sea of Azov under the international law," reads the statement of EU.

The EU also reiterated its support for Ukraine's sovereignty, territorial integrity, and independence within its internationally recognized borders and urged Russia to do the same.