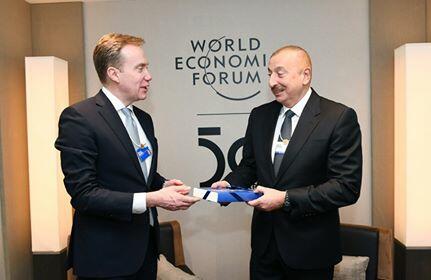 Axar.az informs that, President of the World Economic Forum Borge Brende presented to the head of state a limited edition of only 200 pieces of chocolate for influential guests on the occasion of the 50th anniversary of the Forum.

During the meeting, the sides exchanged views on the history and significance of relations between Azerbaijan and the Davos Forum. The importance of the role of our country in the region's economy, transport and infrastructure was emphasized. The importance of the protocol of intention to be signed today was highlighted by the continuation of last year's memorandum signed between President of Azerbaijan Ilham Aliyev and President of the World Economic Forum Borge Brende. According to the document, the regional center of the Forum will be established in our country.

During the conversation, it was noted that such centers are created in a very limited number of countries and their main purpose is to fulfill the challenges and opportunities that led to the Fourth Industrial Revolution.

Then the protocol of intention on establishment of the regional center of the World Economic Forum in our country was signed.

The document was signed by President Ilham Aliyev and President of the Forum Borge Brende.