Prime Minister held a video conference on the coronavirus 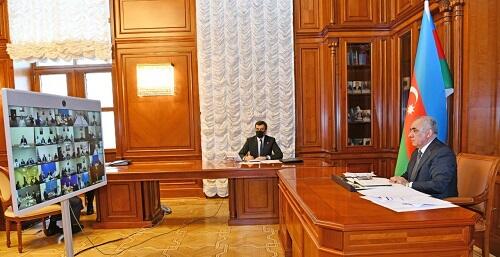 Today, on the instructions of President of the Republic of Azerbaijan Ilham Aliyev, a wide-ranging Republican video conference was held under the chairmanship of Prime Minister Ali Asadov.

Axar.az informs that, according to the Cabinet of Ministers, the meeting was attended by Aide to the President of the Republic of Azerbaijan Zeynal Nagdaliyev, Minister of Internal Affairs Vilayat Eyvazov, Chief of the State Security Service Ali Nagiyev, Prosecutor General Kamran Aliyev and heads of executive authorities of 77 cities and regions. Heads of state security departments attended.

During the meeting, the epidemiological situation in the regions where the strict quarantine regime is not applied was discussed, and the implementation of quarantine rules was assessed. It was stated that there is a need to strengthen control over the observance of sanitary-epidemiological rules by the population.

The Prime Minister noted that as a result of the easing of the quarantine regime, there has been an increase in violations in a number of cities and regions.

The Prime Minister stressed the importance of keeping accurate statistics on the situation in the regions, monitoring the areas where the infection is most prevalent, and strengthening disinfection and utilization in hospitals for coronavirus patients.

The Prime Minister demanded that the heads of districts and cities fulfill their tasks in a timely and flawless manner.