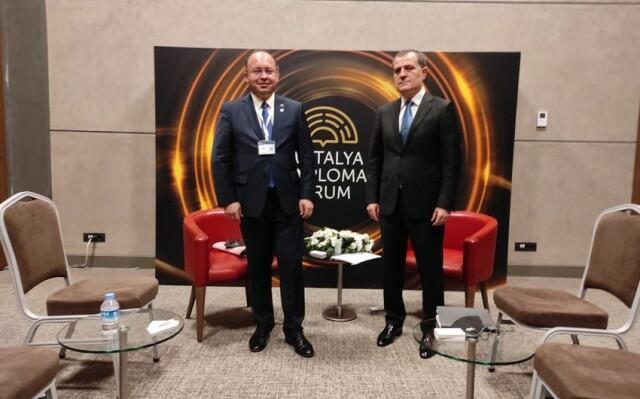 Azerbaijani Foreign Minister Jeyhun Bayramov has met with his Romanian counterpart Bogdan Aurescu as part of his participation in the Antalya Diplomatic Forum in Antalya.

Axar.az reports that according to the Foreign Ministry, Bayramov noted with satisfaction the relations between Azerbaijan and Romania based on mutual respect and support. Bilateral economic, humanitarian, educational, etc. It was noted that there are favorable opportunities for expanding cooperation in these areas.

The Minister also briefed his counterpart on the situation in the region after the conflict, the implementation of trilateral statements, the steps taken by Azerbaijan in this regard, the restoration and construction work carried out in the liberated areas. It was noted that with the elimination of the occupation factor, there is an opportunity to normalize relations between the two countries.

Then Aurescu said his country was interested in expanding relations with Azerbaijan in various areas, noting the importance of the activities of the Azerbaijan-Romania Joint Commission in this regard.

Minister Aurescu said that this year will mark the 30th anniversary of the establishment of diplomatic relations between Azerbaijan and Romania, and invited his counterpart to visit his country in this regard.