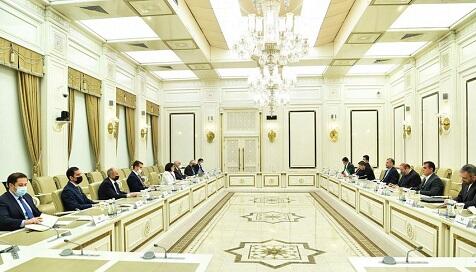 Chair of the Milli Majlis Sahiba Gafarova had a meeting on 22 December with the Minister of Foreign Affairs of the Islamic Republic of Iran Hossein Amir-Abdollahian who is on a visit to our country, The Press and Public Relations Department of the Milli Majlis told.

Axar.az reports that welcoming the guest, Mrs Gafarova expressed a hope that his first ever travel to our country will inject an impulse in further strengthening of the relations between our countries, especially since the situation is favourable for the bilateral co-operation to become deeper yet. The state leaders’ reciprocal visits and conversations as well as their political wills are central to the progress of our relations. The high-level negotiations and the documents signed between our countries constitute the legal frameworks for the Azerbaijani-Iranian relations.

The Chair of the Milli Majlis brought up Azerbaijan’s having ended the 30-year-long occupation of its lands by Armenia and liberated those areas from the invaders under the leadership of Commander-in-Chief Ilham Aliyev in the 44-day Patriotic War. Now, our state is busy implementing large-scale restoration and rebuilding initiatives in the provinces delivered from the captivity.

As she proceeded to talk about the place and role of inter-parliamentary connexions in the system of interstate relations, the Chair of the Milli Majlis lauded the fact that the legislatures of both countries had the friendship groups in action. Two-way visits and regular encounters of our MPs matter much in terms of exchanging law-making experience and information, Sahiba Gafarova added.

The efficient activities of our MPs and their mutual support whilst discussion various topics under the roves of international organisations were referenced as well. The Parliamentary Network of the Non-Aligned Movement was incepted in Madrid upon the instance of the President of Azerbaijan only recently. The parliamentary dimension of the NAM is of great importance when it comes to discussing the topics that occupy the minds in the member-states as well as taking a common ground on crucial matters. Mrs Gafarova said she was convinced that the parliaments would continue their dignified contributions to the cause of furthering the bilateral relations.

Thanking for the sincere welcome, the Minister of Foreign Affairs of the Islamic Republic of Iran Hossein Amir-Abdollahian witnessed his satisfaction with the visit to Azerbaijan and the meetings he had had during it. He congratulated the people of Azerbaijan and the Chair of the Milli Majlis cordially on the victory in the 44 days’ Patriotic War and pointed out that his country had invariably supported the territorial integrity of Azerbaijan.

Iran is interested in the bilateral political, economic, cultural and humanitarian relations becoming increasingly advanced; those relations have risen to a new tier qualitatively thanks to the tireless efforts of the leaders of our states, according to Mr Abdollahian.

The political relations setting high standards bear well on the interaction in all the other areas as well; the parliaments are playing an essential role in the continued deepening of the mutual relations, the Iranian minister emphasised.

Other matters of shared interest were talked over during the conversation, too.

The members of the Milli Majlis Working Group for inter-parliamentary connexions with Iran Eldar Ibrahimov and Aziz Alakbarov, Chief of the Milli Majlis Staff Safa Mirzayev, our ambassador in Tehran Ali Alizade and the ambassador of Iran in Baku Seyed Abbas Mousavi and other officials also attended the meeting.