There is nothing unacceptable in Baku's peace proposal! 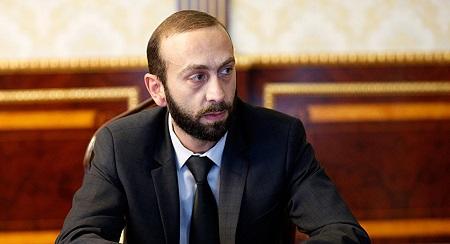 There is nothing unacceptable for Armenia in Azerbaijan's proposals on the peace treaty.

Axar.az reports that the Minister of Foreign Affairs of Armenia, Ararat Mirzoyan, said this at the parliamentary session on October 5.

He emphasized that Armenia and the international community are aware of the 5-point proposals presented to Yerevan by the Azerbaijani side in March of this year.

A. Mirzoyan noted that the normal negotiation process between Baku and Yerevan will continue.

It should be noted that Azerbaijan proposed the following principles to Armenia for the normalization of relations:

- mutual confirmation of the states' lack of territorial claims against each other and the legal obligation not to make such claims in the future;

- refrain from threatening each other's security in interstate relations, using threats and force against political independence and territorial integrity, as well as other situations incompatible with the goals of the UN Charter;

- delimitation and demarcation of the state border, establishment of diplomatic relations;

- opening of transport and communications, creation of other relevant communications and cooperation in other areas of mutual interest.