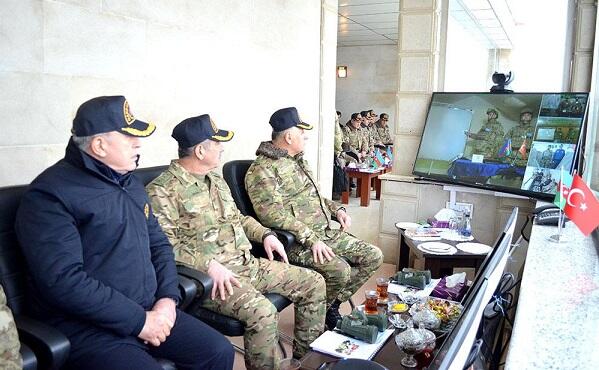 The delegation led by the Minister of Defense of Azerbaijan, Colonel-General Zakir Hasanov, and the Minister of National Defense of Turkey, Hulusi Akar, watched the exercises performed in the territories of Astara, Jabrayil and Imishli regions live through specially installed monitors.

In the end, the tasks performed in all directions were analyzed together with the commanding staff connected via video link.

It should be noted that the training involving the personnel of different types of troops of the Azerbaijan Army and the Turkish Armed Forces, combat and special-purpose engineer-fortification equipment, as well as military aviation vehicles, covers the city of Baku, as well as the territories of Astara, Jabrayil and Imishli regions.

In the joint exercise, the main focus was on ensuring combat coordination during the interaction of troops, improving management, sharing experience, and increasing the professionalism of personnel.