Mercury set to flit across the Sun 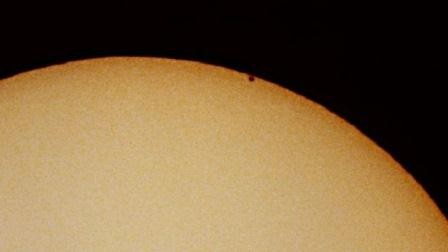 Skywatchers across the globe will see Mercury transit the Sun on Monday.

The Solar System`s smallest planet will pass directly between Earth and our star from around 11:12 GMT to 18:42.

The event is impossible - and dangerous - to view with the naked eye or binoculars, but astronomy groups worldwide will offer a chance to view it through filtered telescopes.

Views from space and ground telescopes will also be live-streamed online.

They will show Mercury as a tiny black disc, smaller but darker than many sunspots, slowly traversing the Sun`s giant yellow disc.

Mercury spins around the Sun every 88 days, but its orbit is tilted relative to the Earth`s. It is that discrepancy which makes it relatively rare for the three bodies to line up in space.

From western Europe, north-western Africa and much of the Americas, Mercury`s seven-and-a-half-hour glide across the Sun will be visible in its entirety. A further swathe of the planet (see map below) will be able to see part of the transit, depending on local sunrise and sunset times.

The only land masses to miss out completely will be Australasia, far eastern Asia and Antarctica.

Because Mercury is so small - just one-third as big as Earth and, from our perspective, 1/150th of the Sun`s diameter - its transit can only be glimpsed under serious magnification; the "eclipse glasses" used by thousands of people to view last year`s solar eclipse will be useless.

And to avoid permanent eye damage, any telescope must be fitted with a solar filter before being trained on the Sun. The British Astronomical Association explains on its website how amateur stargazers can enjoy the spectacle safely.