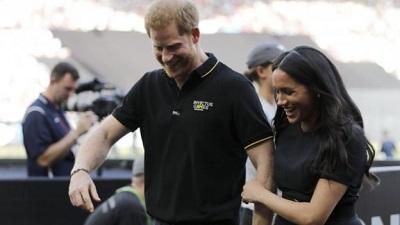 The Duke and Duchess of Sussex have begun the final day of their overseas tour as the Mail on Sunday says it will "vigorously" defend itself in a court case launched by the couple.

Prince Harry's wife is suing the paper over a claim it unlawfully published a private letter Meghan sent to her father, Thomas Markle.

The duke said the legal action was in response to "relentless propaganda".

A Mail on Sunday spokesman said the paper stood by the story it published.

Prince Harry said "positive" coverage of the couple's tour of Africa had exposed the "double standards" of "this specific press pack that has vilified [Meghan] almost daily for the past nine months".

The royal couple visited Tembisa township, near Johannesburg, to learn about a scheme to tackle youth unemployment, on the final day of their 10-day tour. They also met Nelson Mendela's widow, Graca Machel.