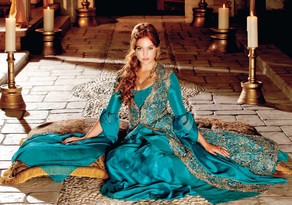 However, date of Meryem Uzerli's visit has not been scheduled yet, the actress will have a performance at Nizami Cinema Center late March, early April with gala of a film, newly played by her.

On March 10, meeting will be held with Ozcan Deniz in Nizami Cinema Center.

Ozcan Deniz and Şukru Ozyıldız will meet Azerbaijani spectators with gala of a new film.