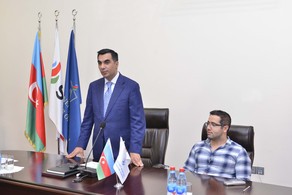 Presentation of Young Robotic Engineers Project was held at Baku Higher Oil School (BHOS). The project was initiated by Kerim Kerimov, a fourth-year BHOS student specializing in Process Automation Engineering who became a winner of 8thcontest for grants of the Youth Foundation under the President of the Azerbaijan Republic.

According to the BHOS press service, opening the meeting, Rector of BHOS Gasimov welcomed the attendants and emphasized the importance of robotics technology as a strategic direction in the development of science, technology and innovation-based economics. After that a famous young Azerbaijani scientist Teymur Sadikhov, who worked at the National Aeronautics and Space Administration (NASA), delivered a lecture.

There are 20 first-year and second-year students from various universities of Baku participating in the project and compiling five teams of four persons in each.During the project implementation, the participants will attend a five-day workshop to be conducted with usage of methodological guidelines and reference material covering theory and practice of the robotics technology. On the last day of the workshop, a competition for robot design and construction will be organized. Each member of the winning team will receive a set of electronic parts for training purposes to be regularly used for applying knowledge into practice.