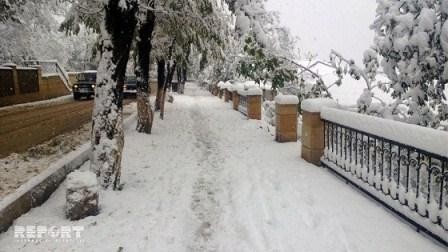 Snow accompanied by wind and frost in Lerik region yesterday uprooted trees. Power and communication lines disrupted. Starting from night, power supply interrupted in several villages, communication lines disrupted. Several neighboring villages were left without power after destruction of electric poles and electric cables broken in Jangamiran village. According to the residents, most of the villages are dark at present.

Deputy Head of Lerik Region Executive Power, Chairman of the Commission on Emergency Situations, Habil Malikov said that measures are being taken in regard with the occurred situation.

Notably, snow cover depth makes 20 cm in Lerik city, while higher in the upper areas. No problem occurred in traffic on Lankaran-Lerik highway.