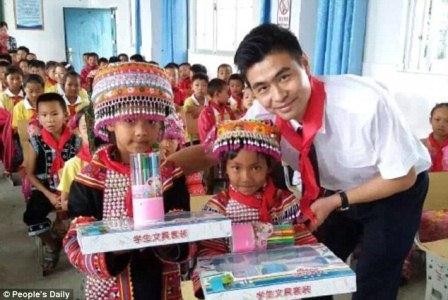 A Chinese airline rewarded one of its pilots with three million yuan (£360,000) today for preventing a collision between two planes that could have killed 439 people.

The pilot's Airbus A320 was about to take off from an airport in Shanghai last month when it encountered an Airbus A330 in its path along the runway, reports the People's Daily Online.

The pilot, named He Chao, chose to accelerate and fly over the other aircraft avoiding a head-on crash by just 19 metres (62 feet).

The Civil Aviation Administration of China (CAAC) released a simulation of the incident during their investigation last month.

The video shows the A320 was speeding up on the runway when Mr He spotted the A330 entering its runway just feet away.

At the time, the Airbus A320 was already travelling at approximately 240kmh (149mph), according to a statement on China Eastern Airlines' website.

Mr He decided to accelerated and made a sharp climb. His aircraft narrowly missed the other plane.

The near-miss incident has shocked the Chinese media. Many have compared it to the Tenerife airport disaster, a fatal runway crash between two Boeing 747s that killed 583 people in 1977.

China Eastern Airlines rewarded the quick-thinking pilot He Chao with the cash bonus during a ceremony earlier today. The cabin crew were also given 600,000 yuan (£71,000).

According to an earlier article from People's Daily, there were 413 passengers and 26 crew in total on the two flights.

Both aircraft involved in the near collision belong to China Eastern Airlines.

The Airbus A330 had flown from Beijing to Shanghai, carrying 266 passengers, while the Airbus A320 was taking off from Shanghai for Tianjin, carrying 147 passengers.

An investigation launched by China's aviation authority, CAAC, found that air traffic control were at fault for the incident.

CAAC suggested that the control centre and the crew members of the A330 failed to maintain proper communication with the controller.