12 December is the memorial day of Heydar Aliyev 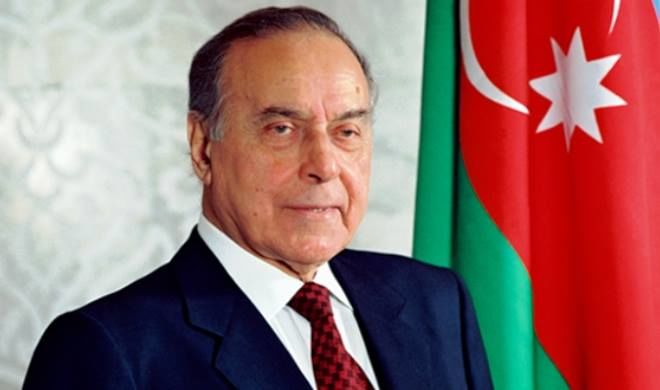 December 12 marks the death anniversary of a great person, political figure and Azerbaijan’s national leader Heydar Aliyev, who passed away 13 years ago.

Heydar Aliyev, who devoted his life to prosperity and well-being of his nation, holds a special place in the history of Azerbaijan.

A talented politician and public figure Heydar Aliyev demonstrated his ability as a national leader and became a legend even when he was alive. The national leader has done unparalleled works for his nation during his ruling over the country during the Soviet period and as the president of an independent Azerbaijan.

Heydar Aliyev, who assumed the leadership of the country during the most difficult of times at the request of his nation, gave great confidence to the people and laid the foundation for a country with the strong economic development.

He participated in the most complex and contradictory historical processes in the world without losing his self-control in difficult situations, appreciating geopolitical changes that could dramatically affect people.

It is no coincidence that Heydar Aliyev was always referred to as the founder of contemporary Azerbaijan. He created a new milestone in the modern history of Azerbaijan.

Heydar Aliyev was a unique leader, who gained the love and respect of millions of people through his bright ideas and genuine works. He will remain with us eternally through his ideas and the works he accomplished for the future of Azerbaijan.

Heydar Aliyev was born in Nakhchivan, Azerbaijan, on May 10, 1923. After graduating from the Nakhchivan Pedagogical School in 1939, he studied at the Architecture Department of the Azerbaijan Industry Institute (present Azerbaijan State Oil Academy), but war didn't allow him to complete his education.

Aliyev headed a department at the People's Commissariat of Internal Affairs of the Autonomous Soviet Socialist Republic of Nakhchivan in 1941, and was sent to work at the state security bodies in 1944.

He became deputy chairman of the Committee of State Security under the Azerbaijan's Cabinet of Ministers in 1964, and was conferred the rank of lieutenant general. At that time, he studied in a special retraining school in Leningrad (present St. Petersburg), and then graduated from the History Department of the Azerbaijan State University.

Heydar Aliyev was elected a member of Political Bureau of the Central Committee of the Communist Party of Soviet Union in December 1982, and, being appointed to the post of the First Deputy Chairman of the Cabinet of Ministers of the USSR, became one of the leaders of the USSR.

In October 1987, Aliyev resigned from his post in protest against the policies pursued by the Political Bureau of the Central Committee of the Communist Party of the Soviet Union and the Secretary General Mikhail Gorbachev himself.

After the tragedy on 20 January 1990 in Baku by the soviet troops, Heydar Aliyev demanded punishment for the organizers and executors of the crime committed against Azerbaijani's people. To protest against the hypocritical policy of the USSR leadership and the conflict that accrued in Nagorno-Karabakh, he left the Communist Party of the Soviet Union in July 1991.

As a result of extreme governmental crisis in May-June 1993, the country was on the verge of a civil war and loss of independence. Azerbaijani people wanted to bring Heydar Aliyev to power. So, he was elected as the Chairman of Supreme Soviet of Azerbaijan.

Heydar Aliyev came to power as the president of Azerbaijan on July 24, 1993 approved by the parliament - the Milli Mejlis.

Heydar Aliyev was elected president of Azerbaijan in a nationwide vote on October 3, 1993, and was re-elected in 1998.

Considered as the greatest Azerbaijani politician, he was awarded a number of state orders and medals and international awards. He was also elected as honorable doctor of universities in many countries including the Lenin Order -four times- and Order of Red Star, he received orders and medals from foreign countries and received rank of the Hero of the Socialistic Labor twice.

He also received "Yaroslav Mudry" Order, the supreme order of Ukraine, "Peace Premium of Ataturk" Order, the high order of Turkey, and also the Honorable Professor of Moscow State University.

President Heydar Aliyev was elected professor and full member of the Academy of Safety, Defense and Legal Norms Problems of the Russian Federation. He was awarded the premium of Andropov on April 3, 2003. On May 10, 2003, a decree was signed on awarding Heydar Aliyev the Order of Saint Apostle Andrey Pervozvanny, the supreme order of Russia.

Azerbaijani National leader Heydar Aliyev died on December 12, 2003, but the memory of the brilliant politician is still alive to this day.

Heydar Aliyev was a unique leader, who gained the love and respect of millions of people through his bright ideas and genuine work. He will remain forever in the memory and hearts of the people as positive changes in their lives are directly associated with the name of the great leader and his farsighted policy.

Every year, the people of Azerbaijan and all Azerbaijanis living around the world commemorate his cherished memory.

Heydar Aliyev lives and will live eternally because he has always been associated with strong bonds with the people, which were the source of his strength and power.

His immortal ideas and wise policy was successfully continued by President Ilham Aliyev. Under this farsighted policy, Azerbaijan is rapidly developing and gaining more reputation in the world day by day.