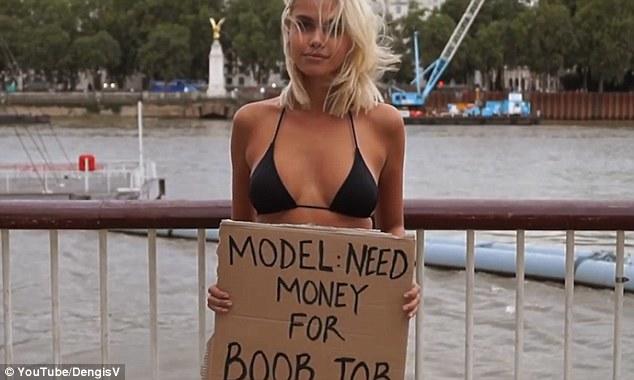 People will go to extreme lengths to achieve their dream body - but few would resort to standing on the street in a bikini asking strangers to help fund a boob job.

Yet this footage shows blonde model Juliane Snekkestad standing on London's South Bank in a skimpy black bikini and doing just that.

The video, which has been viewed over 40,000 times on YouTube, shows a male passerby offering Juliane £1,000 to spend a night with him, but it's ultimately revealed she's raising money for a different reason altogether.

The model, who stood holding a sign that reads 'model: need money for boob job', was actually taking part in a stunt dreamed up by vlogger DengisV to raise money for breast cancer research.

The man, who cannot be seen in the footage, is heard telling Juliane: 'I'll give you a grand for a night with me.

The clip also shows a crowd gathering beside the river, with some passersby dropping coins into the model's collection, while other startled onlookers snapped pictures on their camera phones.

A female passerby also stops to try and dissuade Juliane from cosmetic surgery, telling her: 'It's not about image, it's about what's in you and expressing that and not something that's only on your body.'

As it turned out, the woman needn't have worried, as the London-based Norwegian model had no real intention of ever going under the knife.

The whole thing was actually a ploy dreamed up by YouTuber DengisV.

Any money that was contributed to Juliane's collection was donated to breast cancer research.