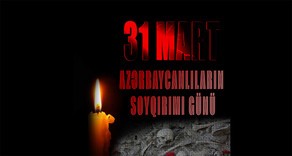 The main target in 31 March genocide committed by Armenians is to banish Azerbaijanis from their native lands and establish "Great Armenia" so-called by Armenian historians and ideologists, in these areas. "Historical facts prove that 114 thousand square kilometers of Azerbaijani lands decreased to 86.6 thousand sq km in the maps of the last century, as a result of Armenian occupation and withdrawal of local population."

It was stated by the Chairman of Caucasian Muslims Office (CMO) Sheikh-ul-Islam Haji Allahshukur Pashazade, Archbishop of Baku and Azerbaijan Alexander, the head of the community of Mountain Jews Melih Yevdayev and the head of the European Jewish community leader Gennady Zelmanovich while addressing the world religious leaders, parliaments and international organizations about the genocide committed by Armenians on March 31.

'Still in the twenties of XVIII century tsar Peter I has instructed on placing of Armenians in Baku and Derbent, the historical lands of Azerbaijanis. And in 1802 tsar Alexander I, has directed to the Caucasian governor concrete instruction about use at any cost Armenians at capture of the Azerbaijan khanates. As a result of the Russian-Iranian and Russian-Turkish wars in XIX century, on the Azerbaijani lands it has been moved 40 thousand Armenians from Iran and 85 thousand from Turkey, and in territories of Iravan and Nakhchivan khanates “the Armenian province” was formed. As a matter of fact, it became the base of the future Armenia created at the expense of the Azerbaijani lands. It has to be reminded that at that time in the city of Yerevan there lived 7331 Azerbaijanis and 2369 Armenians. In the spring of 1918 Armenians, including Stepan Shaumyan, who, under the mask of a Bolshevik, pursued dashnak policy, and his supporters have carried out evil deeds concerning Azerbaijanis in Baku, Shamakhi, Guba, Karabakh, Lankaran, Ganja, Zangezur and in other regions, with special cruelty have exterminated more than 70 thousand innocent people, have wiped villages, and their inhabitants have been driven from homelands. The Armenian armed groups have destroyed 229 villages in the Baku district, 272 - in Ganja, 15 - in Zangezur province and 157 - in Karabakh. In 1918-1920s, the dashanks with unprecedented cruelty have killed in the Western Azerbaijan of 565 thousand Azerbaijanis.

We, heads of religious confessions of Azerbaijan, urge the religious community to give right political and legal estimation of the genocide committed by Armenians against Azerbaijani people.

Let the Almighty Creator to be fair to all of us to choose between right and wrong! Amen!", the statement reads.