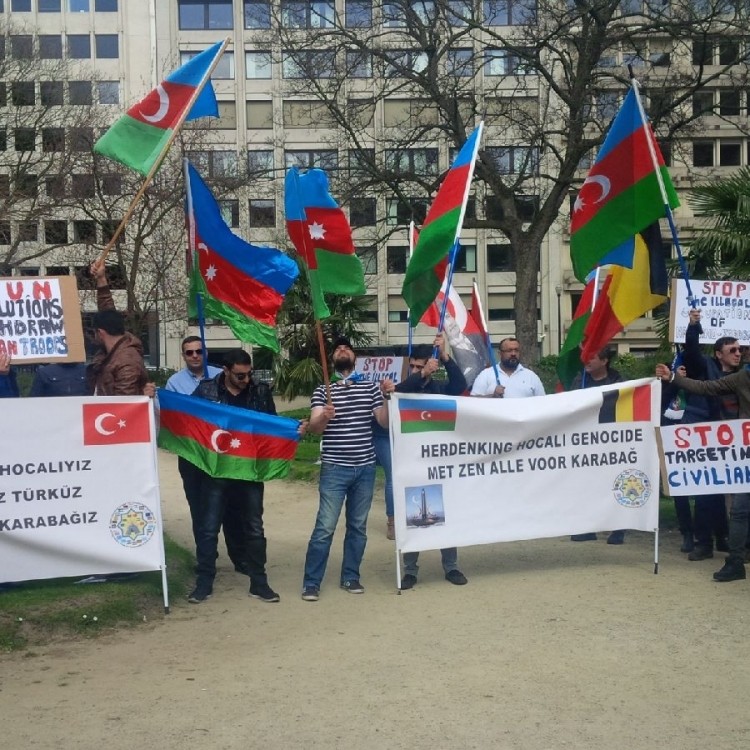 On 11 April, more than 50 Azerbaijanis brought the truth of the Armenian occupation of Nagorno-Karabakh and the seven surrounding regions to the door of the Armenian Embassy in Brussels with a peaceful demonstration. The response was so potentially violent that more than 40 riot police were called. They used their riot shields to keep some of the Armenians at bay in their Embassy.


The protest was organised by the Azerbaijani–Belgian Friendship Society and World Azerbaijanis Congress, amongst other groups, and supported by the Benelux office of The European Azerbaijan Society (TEAS).

Initially gathering in the historic Square de Meeus, they waved flags, lifted placards and shouted such slogans as ‘Sargsyan – Instigator’ – referring to the Armenian President’s past role as a military commander – ‘Stop targeting civilians’, ‘Obey UN resolutions – withdraw Armenian troops’, ‘Stop the illegal occupation of Nagorno-Karabakh’, ‘We are Karabakh’ and ‘We are Khojaly’, and ‘Karabakh is and always has been Azerbaijan’. The protest culminated at the Armenian Embassy.

Ayhan Demirci, Director, Azerbaijani–Belgian Friendship Society, stated: “We are very distressed about what has happened in our motherland. Our nation is distraught. Azerbaijan does not occupy the territory of any other country – we are merely protecting our homeland. We want to free our lands from the Armenian occupation so that the approximately one million refugees and internally displaced persons (IDPs) can return home. We will not be calm until the occupiers and external forces take their hands off Karabakh. We are not against Armenians living in Azerbaijan.

“The occupation has continued for nearly 25 years and it seems that the international community is apathetic about the issue. I see little hope for peaceful conflict resolution. We see that the OSCE Minsk Group, the UN and the EU are doing nothing to insist on the withdrawal of Armenian troops from Karabakh. As we all know, the Armenian troops fired on the civilian population earlier this month. They ignored our requests, and this was the reason for today’s protest. After targeting civilians near the ‘contact line’ they started shooting towards Nakhchivan, but Azerbaijan has demonstrated that it can protect itself. We are together, with one heart and one hand.”

The protest came in the wake of an unprecedented level of violence on the ‘contact line’ between Azerbaijan and the Armenian-occupied territories, which has seen the death of 31 Azerbaijani servicemen and scores of civilian casualties. This week, Pedro Agramunt, President, Parliamentary Assembly of the Council of Europe (PACE) said: “I am extremely worried at the reports of violence in Nagorno-Karabakh and deeply saddened at the loss of life. All Armenian armed troops must withdraw from the occupied Azerbaijani territories in compliance with the UN Security Council resolutions.”

Federica Mogherini, High Representative/Vice-President, European Union External Action commented: “Reports of heavy fighting along the ‘line of contact’ are deeply worrying. The European Union deplores the loss of life, in particular the reports of civilian casualties and deaths.”

The time has come for Parliaments around the world to support Azerbaijan and place sanctions on Armenia until they implement the four outstanding UN Security Council resolutions that have been on the table for 22 years. These demand that Armenian forces leave Azerbaijani territory, enabling the IDPs and refugees who are the ongoing victims of the occupation to return home.in Austria.