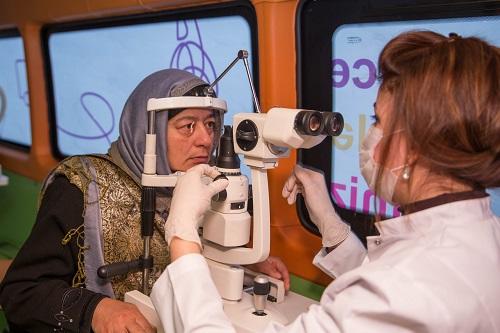 Mobile Eye Clinic supported by Azercell Telecom, over the 20 years pioneering various Corporate Social Responsibility projects, provided free services to 864 people in 2017. In January the doctors of mobile clinic examined refugees and the deprived in Kurdamir district. As a result, some patients were assigned eyeglass prescriptions while some others received various treatment. Moreover, the doctors also checked 58 people in the polyclinics No. 13 in Amirjan settlement and polyclinics No. 23 in Hovsan settlement. Additionally, with the support of Social Protection Fund in Sabunchu, 42 more people benefited from the service in the beginning of the year. In February, the clinic served further 78 people in Bilgah and Shaghan settlements. 42 people in the boarding school No. 11 located in Bilgah, 36 people in boarding house for disabled in Shaghan and 32 patients in Red Crescent Society in Narimanov district were examined. The clinic was especially active during the spring months. Thus, in March the doctors provided services to Russian Community in Narimanov district, children in SOS Children’s Village in Gandja and refugees in Lokbatan settlement. In April and May, Mobile Eye Clinic examined 29 children in boarding school No. 10 in Pirshagi settlement, 30 low-income individuals in Pirallahi settlement with the support of Local Executive Power, 84 children in Yasamal and Nizami districts, as well as 35 children in the secondary school in Godekli village, Khachmaz. In June, the doctors examined and treated 43 refugees and internally displaced persons (IDPs) in Yasamal and Darnagul districts and 25 more in Red Cross in th 20th area. The doctors also served 28 IDPs settled in Khachmaz in June.

28 IDPs settled in Sumgait benefited from the services of the clinics in July. The doctors also examined a displaced person in Sevinj kindergarten in Khirdalan and 59 individuals in need of treatment in the settlement of Buzovna in August. Furthermore, the clinics examined and treated 31 individuals in “Umid yeri” sanctuary in Bina settlement and 22 more in psychoneurological establishment No.1 located in Buzovna settlement in October.

During the years of operation, the clinic supported by Azercell and Caspian Compassion Project Public Union visited most of the boarding schools and orphanages in Baku. The doctors of the clinics visited Baku and other regions in the country and supported people in need of treatment.