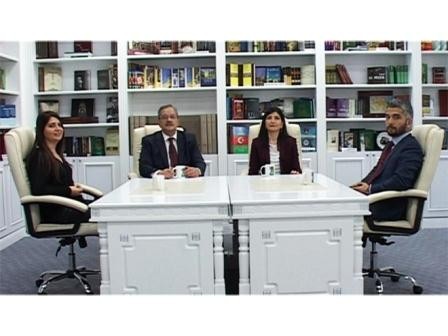 Holding the 7th Global Forum of the UN Alliance of Civilizations (UNAOC) in Baku was very important, as Azerbaijan got an opportunity to show the world its multicultural and tolerant identity and its successful model of peaceful coexistence of different religions and ethnic groups.

The Forum, held in the Azerbaijani capital on Apr. 25-27, was in the limelight of expert discussions held by the Baku International Policy and Security Network think tank.

The participants of the discussions, moderated by Elkhan Alasgarov, PhD, head of the Baku Network's expert council, were Tamerlan Vahabov, a politics and international relations expert, Sevil Mikayilova, editor-in-chief of Azernews newspaper, and Aynur Gasimova, deputy editor-in-chief of the Trend Agency.

The experts said it is very important that the Forum has taken place in Azerbaijan, which is a Muslim country, and it is a very good moment to show the world that a Muslim country can be tolerant and embrace the principles and values of coexistence.

During the discussions, it was noted that being a Muslim majority country, Azerbaijan is a home to a big Jewish community, to Catholics, Protestants and members of the Russian Orthodox church.

Recalling that 2016 was announced the Year of Multiculturalism in Azerbaijan, the experts said multiculturalism is a state policy in the country, what has made Baku an ideal place for holding the 7th UNAOC Global Forum.

The participants of the discussions noted that the Forum brought together a lot of prominent politicians and experts from all over the world, who had an opportunity to discuss very pressing and important topics and challenges.

They also expressed hope that the Forum will send a very important message to the world about stopping conflicts, violence and terror.