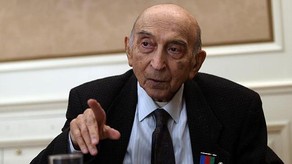 Presentation ceremony of 'Nizami Gancavi Gold Medal of the Republic of Azerbaijan' was held at the General Meeting of the Azerbaijan National Academy of Sciences (ANAS) today.

World-famous Azerbaijani scientist Lotfi Zadeh (Lutfi Rahim Alasgarzade) has been awarded the higher prize for unprecedented services in establishment and development of the theory of fuzzy sets and fuzzy logic, academician Boyukkishi Agha Aghayev for achievements in improvement and application of reconstructive and restorative operations of liver, biliary tract, pancreas diseases in Azerbaijan as well as in preparation of three-volume 'Atlas of surgical operations' book.

It was noted that this decision has been taken at the last meeting of the Presidium of Azerbaijan National Academy of Sciences.

Also noted that authority to award the mentioned medal has been empowered to the academy under order of the head of the state on June 27, 2014.