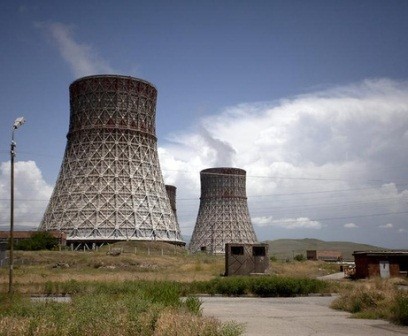 Located in a seismic zone, the Metsamor Nuclear Power Plant (NPP) poses a very big threat to Azerbaijan, Turkey, Iran and Georgia, the Institute of Radiation Problems of Azerbaijan National Academy of Sciences (ANAS) said in a statement on May 13, APA reports.

According to the statement, the Metsamor NPP consists of two blocs, which were put into operation in 1976 and 1980. The NPP is situated 28km from Yerevan, 16km and 60km from the borders with Turkey and Iran respectively, and 150km from the border with Azerbaijan. Metsamor operates using 42 tons of annual nuclear fuel. After the Spitak earthquake in 1989, the NPP was shut down. However, one of its two blocs was again put into use again in 1993. This bloc expires in 2016.

The statement said that the International Atomic Energy Agency (IAEA) will reconsider whether or not the Metsamor NPP’s period of operation should be extended.

“The NPP poses a very serious threat. A decision was reached in 2009 that a new NPP should be build. The plant was not constructed due to lack of funds. There is no doubt that the Metsamor NPP is a big threat to the region, and is not in good condition. So we should convince the international community that the plant has to be shut down. That is, the International Agency should not authorize the Metsamor NPP to operate,” said the statement.

The Institute of Radiation Problems also added that it has been long a time since the issue of Metsamor’s closure was raised.

“Azerbaijan needs to win partners over this problem. Iran, Turkey, Georgia and members countries of the IAEA should demonstrate a certain position regarding the closure of the plant, and then the IAEA would make a decision in this regard,” the statement said.