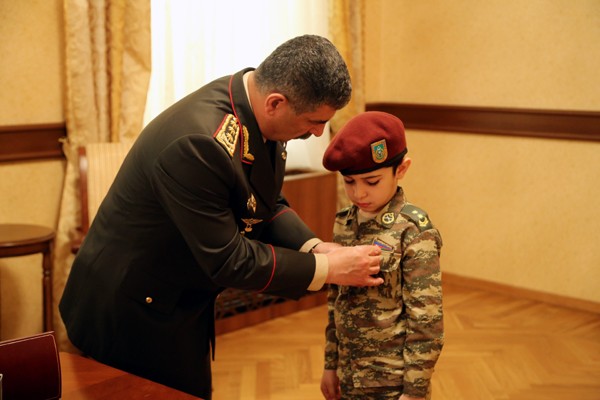 Under the order signed by President of Azerbaijan, Supreme Commander-in-Chief of the Armed Forces Ilham Aliyev on 19 April 2016, the honorary titled of “National Hero of Azerbaijan” has been conferred posthumously on Lieutenant Colonel Murad Mirzayev and Major Samid Imanov for their exceptional service in the protection of the country’s territorial integrity and bravery in performing their combat duties.

On May 16, the two military servicemen’s families were given the “Golden Star” medals at the Defense Ministry.

In his speech at the presentation ceremony, Azerbaijani Defense Minister, Colonel General Zakir Hasanov offered his condolences to the families of those killed in the recent fighting, praising their valor.

According to him, the martyrs, having sacrificed their souls and blood, made a new history and will be always remembered by the people.

The minister said that the martyrs have been revenged, expressing his confidence that the occupied Azerbaijani lands will certainly be liberated under President of Azerbaijan, Supreme Commander-in-Chief of the Armed Forces Ilham Aliyev.After the order was read out, Minister Hasanov presented the certificate of "National Hero of Azerbaijan" title to Lieutenant Colonel Murad Mirzayev’s wife Fizza Mirzayeva and "Gold Star" medal to his 7-year old son Nurlan.

Then "Gold Star" medal and the certificate of "National Hero of Azerbaijan" title were presented to Major Samid Imanov’s father Samid Imanov. he martyrs’ family members expressed gratitude to President of Azerbaijan, Supreme Commander-in-Chief Ilham Aliyev and leadership of the Defense Ministry for the presentation of awards.

They underlined that the defense of the country is above all else, saying that they are proud of the martyrs.It was noted that Azerbaijani armed forces will soon liberate the occupied territories and the blood of the martyrs will not go in vain.