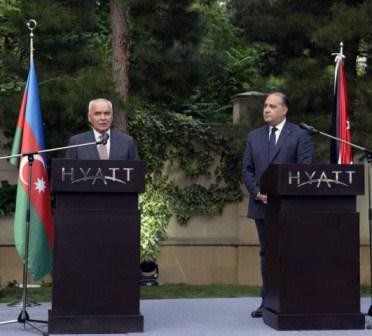 The Jordanian Embassy in Baku has arranged an official reception on the country’s national holiday - the Day of Independence.

After the anthems of both countries were performed, Ambassador Mohammad Nassar Ibrahim al-Habasneh spoke of the path the country passed after gaining state independence, underlining, that during these years his country achieved great successes in the economic and cultural spheres, and that Jordan holds worthy place among the world community.

The Ambassador noted that bilateral relations between Jordan and Azerbaijan successfully develop thanks to the heads of states – King of Jordan Abdullah II and President of Azerbaijan Ilham Aliyev.

He also congratulated President and people of Azerbaijan on 28 May- Republic Day, wished dynamic progress and new successes.

Azerbaijan’s Deputy Foreign Minister Mahmud Mammadguliyev congratulated the friendly people of Jordan on the landmark event on behalf of the Azerbaijani President, and conveyed greetings and best wishes of the head of state to the ceremony participants.

Mammadguliyev said that the reciprocal visits of the heads of state, meetings and talks at high level create favorable environment for development of bilateral relations in the years to come.

Governmental officials, MPs, ambassadors of foreign countries in Baku, representatives of the international organizations and public figures attended the ceremony.