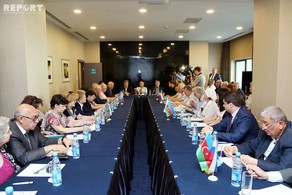 A new administrative building of the State Oil Company of Azerbaijan (SOCAR) was opened in Baku today.

The head of state cut the red ribbon symbolizing the opening of the building.

SOCAR President Rovnag Abdullayev informed the president about the conditions created in the building.

40-storey building is at a height of 200 meters. The ceremony of laying the foundation of the building was held on October 12, 2010, with the participation of Azerbaijani President Ilham Aliyev.

All the conditions were created for the workers, the building was provided with modern equipment.