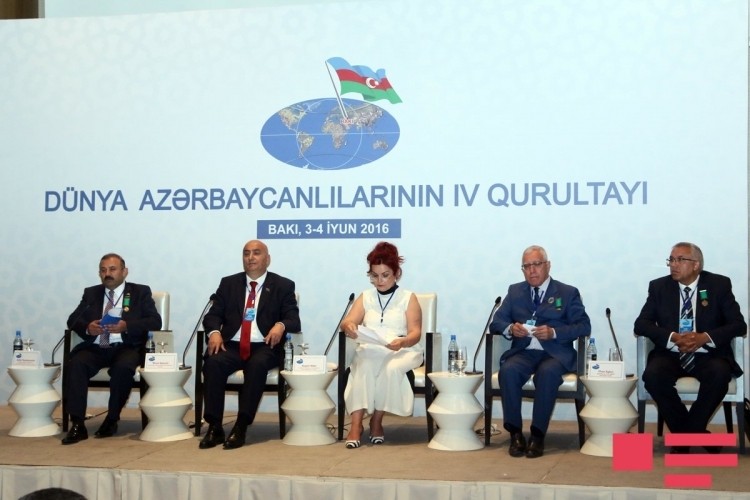 Today, a panel on “integration to society and participation in political life” was organized within the 4th Congress of World Azerbaijanis.

Moderator of the event head of history department of Giresun University offered weak participation of Azerbaijanis in socio-political life of countries where they live as a topic of the discussions.

Professor at Kiev National Aviation University Arif Guliyev said Azerbaijanis living abroad must support one another. He stressed Azerbaijanis are not sufficiently represented in Ukrainian political organizations, state bodies: “Most of students studying in Ukraine are not sufficiently interested in education. I informed our minister of education too. The ministry of education is also working on it”.

President of Istanbul Turkey Azerbaijan Association Sefer Karakoyunlu also said support of state and people is for successful activity: “First of all, we must introduce Azerbaijan’s culture in the countries we live. Therefore, cultural centers and libraries must be created in the foreign countries”.

Chairman of the Chuvashia branch of the Public Organization All-Russian Azerbaijani Congress, Aziz Badirov said Azerbaijanis are not actively participating in the events in Russia: “Though we call ourselves Azerbaijanis, they accept us as Turk. We must take this into account and Azerbaijani and Turkish diaporas in Russia must coordinate their activity. On the other side, we must promote our culture. For instance, there is Nizami Ganjavi street, Nizami Ganjavi stadium in Chuvashia. Success of the diaspora must base on participation in information warfare”.

Badirov stressed significance of establishment of relations between Azerbaijan and Chuvashia. He said Azerbaijani embassy in Russia is not active: “We sent a letter to the embassy two years ago. But there is no response yet”.

Chairman of Azerbaijan-Cyprus Friendship Society Orhan Hasanoglu offered to organize trainings for Azerbaijani youths on how to promote Azerbaijan before sending to study.