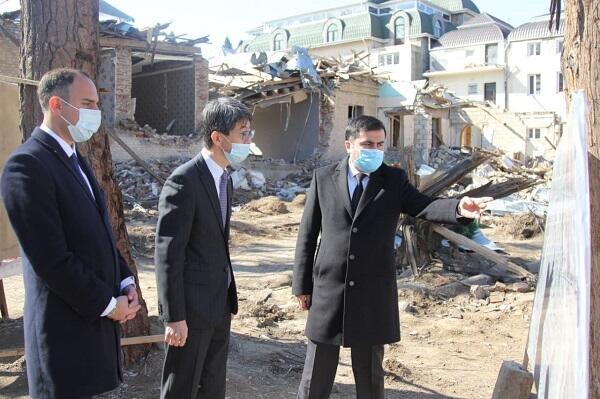 Ganja Mayor Niyazi Bayramov met with newly appointed Ambassador Extraordinary and Plenipotentiary of Japan to Azerbaijan Junichi Wada. Welcoming the guest, Niyazi Bayramov gave detailed information about the industry, culture, sports, and other areas of Ganja, which has an ancient history.

Axar.az reports that he said that by the relevant decree of President Ilham Aliyev, this year was declared the "Year of Nizami" on the occasion of the 880th anniversary of the great thinker Nizami Ganjavi. This is of great importance for ancient Ganja, known as the land of Nizami.

The chief executive also informed the guest that Ganja is the second-largest industrial city in Azerbaijan.

Large industrial enterprises such as the International Airport, Ganja Automobile Plant, AzerAluminum LLC, Ganja Wine-2 operate here. Noting that the city of Ganja, located far from the front line, was shelled by the Armenian armed forces during the war, 26 civilians were killed, more than 120 were seriously injured, residential buildings, infrastructure, historical and religious monuments, education and He said that health facilities were severely damaged.

Japanese Ambassador to Azerbaijan Junichi Wada said he was very pleased with the meeting. He said his first official visit to the regions began in Ganja. The ambassador expressed his disappointment with the events of the war and condemned the terrorist attacks on the civilian population.

The ambassador noted that the main purpose of his visit to Ganja was to expand economic, social, sports, cultural and other ties between the two countries. Junichi Wada reminded that the Japanese government has implemented more than two hundred small grant projects aimed at the development of education, health, and sports in Azerbaijan, of which about 10 are in Ganja. The ambassador expressed interest in expanding this cooperation.

The meeting focused on the projects that Japan intends to implement in Ganja. The most important of these was the work to be done to process household waste and obtain alternative energy.