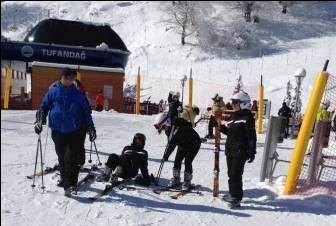 A group of journalists’ visit was organized to Gabala on 20-21 February.

The event was organized for supporting the development of domestic tourism by the most modern and professional hotel brands of the "Qafqaz" hotels.

Tour starting from the hotel "Gabala Yengija Thermal and SPA ,and after breakfast media representatives visited the hotel.

They were informed that, 2014, "Yengija Thermal and SPA" hotel has many advantages for rest and as well as acting as a place of healing since 2014.

Yengija is the ideal place for relax and away from stress. The hotel is one of the most attractive sides in hot water baths, as well as the presence of Naftalan baths.

The 5-star”Qafqaz” Sport Hotel invited media representatives to the dinner. After a trip to snowy weather they stayed at the hotel. After a magnificent breakfast of the second day visit media staff went to “Qafqaz” Tufandag Hotel.

Tufandag hotel in the middle of both resorts offer special weekend packages are attractive to
Tufandag is irreplaceable for ski lovers. The position of hotel, convenience and high level of service is one step ahead other competitors. Tufandag Hotel offers special weekdays and weekend packages to customers.

Customers paying 179 AZN, here include the room for 2 people, spa and fitness center, free ski kit, free of charge, ski clothing, ski line the entrance card at the same time, the hotel early registration (10 from 00) and late exit (16: 00-up) capabilities can achieve.

During the Novruz holiday, Novruz koncha’s will be added to the entertainment. So here's a special campaign will be launched on March 19-28.

It's time to return to Baku

At the end of the day, members of the media returned to Baku.