Champions of Ligue 1 and Serie A were known 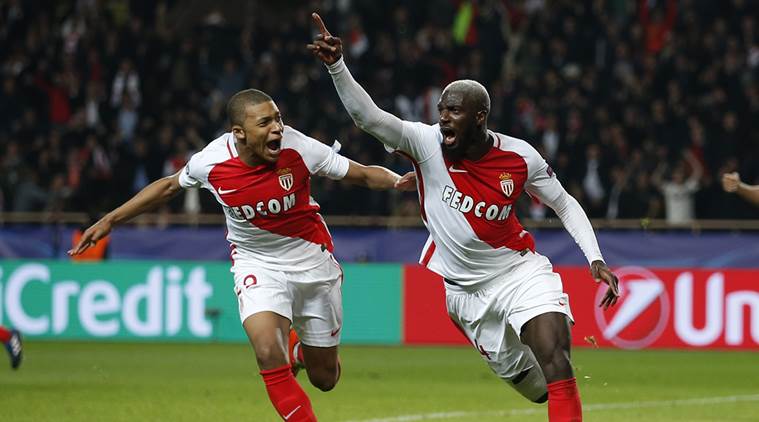 Mbappé fired Monaco on their way to a 2-0 win against St-Étienne which wrapped up the Ligue 1 title for Leonardo Jardim’s thrilling side.

Mbappé grabbed his 15th league goal of the season to help the principality club clinch the championship with a game to spare. Valère Germain put the seal on the win with the last kick of the game.

Monaco kicked off knowing a point would be enough to win a first title since 2000 and end Paris Saint-Germain’s four-year domination, and Mbappé was a fitting hero as PSG were condemned to finish in second spot. Yet St-Étienne did not arrive simply to be party guests, and the Monaco goalkeeper, Danijel Subasic, had to keep out a dangerous early header from Alexander Soderlund.

Moments later Mbappé threatened for the first time, popping up on the right-hand side of the penalty area only to be denied by a fine save at his near post by Stéphane Ruffier.

However, Monaco’s nerves were settled after 19 minutes when St-Étienne lost the ball in midfield, and in a flash found themselves behind. There was no catching Mbappé as he raced on to Radamel Falcao’s through-ball. The 18-year-old danced round Ruffier and rolled the ball into an empty net from an acute angle.

Falcao saw a goal-bound volley blocked after being teed up by another breakneck run from Mbappé, before Bernado Silva floated a cross which just eluded the Colombia forward.

St-Étienne did threaten again before half-time through Florentin Pogba, who had a free header from Jordan Veretout’s cross but planted it straight at Subasic. And Monaco hearts were briefly in their mouths after the break when Veretout broke through and nudged the ball past Subasic, but Kamil Glik got back to thwart the danger.

The hosts were far from their fluent best but should have grabbed a second with 16 minutes left. Mbappé got clear down the right again, but his low cross was wastefully steered wide by Germain from six yards out. But Germain got his goal in stoppage time when he rounded off a swift counterattack to signal the start of the celebrations as Monaco secured the long-awaited eighth title in their history. Juventus beat Lazio to win a third successive Italian Cup final as goals from Dani Alves and Leonardo Bonucci kept them on course for the treble this season with a 2-0 victory in the Olympic Stadium.

The Turin side, who are on the verge of winning a sixth successive Serie A title before facing Real Madrid in the Champions League final in Cardiff on 3 June, won the domestic cup for a record 12th time.

“Compliments to the lads for what they did in the first half and for coming through a defensive test in the second,” said Massimiliano Allegri.

The Juventus coach quickly turned his thoughts to the weekend when his sidecan clinch Serie A with a win over Crotone having missed their chance in a 3-1 defeat on Sunday away to Roma, who are four points behind with two fixtures remaining. “We’ve won the first title, now we want to clinch the second, Sunday against Crotone, who have taken 17 points from the last seven matches,” he said. “It’s going to be a difficult match. We’ll have to play a mean game like this evening’s.”

Juventus, who beat Lazio in the final two years ago, settled the match in the opening 25 minutes with Alves putting them ahead in the 12th from a long, high cross by his fellow Brazilian Alex Sandro. The right-back’s volley was not as sweet as his goal in the Champions League semi-final second leg win over Monaco, but it proved just as effective, bouncing awkwardly on its way past Thomas Strakosha and inside the far post.

Lazio, who had hit the post in the sixth minute through Keita Baldé, conceded a soft second goal 13 minutes later when Alex Sandro flicked on Paulo Dybala’s corner and Bonucci nipped into the six-yard box to knock the ball in.