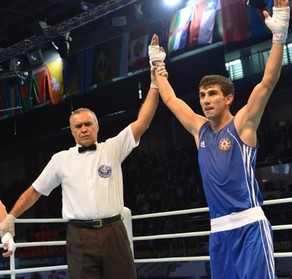 The license gained by Javid Chalabiyev, who defeated Armenian Aram Avagyan at the semi-final.

So, J.Chalabiyev, 56 kg, reached the final and qualified for Rio 2016 for taking first 'trio'. His rival in the tournament's final will be British Ashfag Gais. In the semi-final, A.Gais has defeated Ukrainian Mykola Butsenko.

With this victory Yana Alekseevna (60 kg) reached the final and won the right to participate in the Rio 2016.
At the end of the tournament her opponent was a Bulgarian athlete Svetlana Staneva, who defeated Italian Irma Testa in the semifinals. Notably, in last year's World Championship three Azerbaijani boxers - Elvin Memishzade (52 kg), Albert Salimov (60 kg) and Parviz Bagirov (69 kg) won license to the Rio 2016.