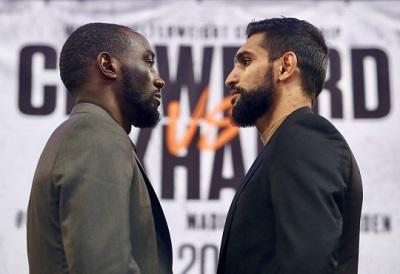 Amir Khan's WBO world welterweight title fight with Terence Crawford ended in bizarre fashion when he was pulled out by his corner after a low blow.

Floored in the opening round, Khan took an accidental shot to his groin in the sixth and, after consulting his corner, said he was in "too much" pain.

American champion Crawford was dominant and later questioned whether Khan quit, urging the Briton to "tell the truth".

"I have never been hit below the belt and was in pain.

"I want to apologise to all of the fans. The fight was just getting interesting."

Boos rang out at New York's Madison Square Garden after the fight, and BBC Sport commentator Mike Costello said Khan "could be in for a storm of abuse".

Former world middleweight champion Andy Lee said Khan had "done himself a misservice", while former two-weight world champion Paulie Malignaggi said he "wasn't going to get back into the fight".