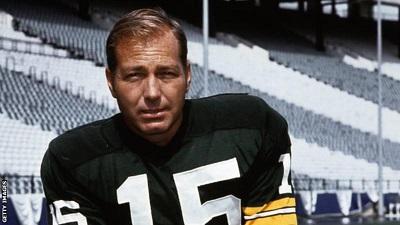 Former Green Bay Packers quarterback Bart Starr has died at the age of 85.

Starr, who suffered a major stroke in 2014, played for the Packers from 1956-71 and led them to five championships.

That included the first two Super Bowls, in 1967 and 1968, when he was named the game's most valuable player.

"His true legacy will always be the respectful manner in which he treated every person he met, his humble demeanour, and his generous spirit," read a family statement.

"He battled with courage and determination to transcend the serious stroke he suffered, but his most recent illness was too much to overcome."

After retiring as a player, Starr coached the Packers from 1975-83 although they only reached the play-offs once during his tenure.

Starr last visited Lambeau Field in 2017 to take part in the festivities commemorating the 50-year anniversary of the Packers' 1967 championship.