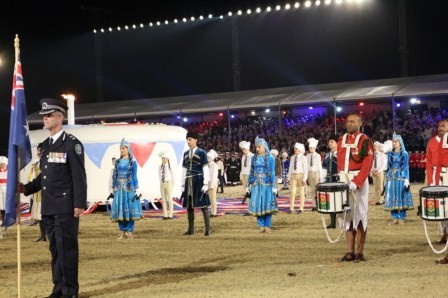 A special breed of Karabakh horses have been represented at a spectacular show program in the grounds of Windsor Castle, co-organized by the Azerbaijan Equestrian Federation and The European Azerbaijan Society (TEAS), at the 90th anniversary Jubilee celebrations of Her Majesty Queen Elizabeth II in London.

Under the instructions of President Ilham Aliyev the Karabakh horses are participating in the grounds of Windsor Castle for the second time. A Karabakh stallion named Zaman which was presented to Queen Elizabeth II in 1956 was the first breed brought to London Castle.

The Azerbaijani delegation led by Chief of the State Border Service, president of the Azerbaijan Equestrian Federation Elchin Guliyev attended the opening ceremony of the Jubilee celebrations.

The Karabakh racing and riding horse was developed in the Nagorno-Karabakh region of Azerbaijan and originally bred during the 18th Century. It is an elegant, muscular, horse, renowned for having a golden tint to its chestnut or bay hair. Some equine experts regard it as having a significant impact on the development of the Arabian breed.

In the early 20th century, Karabakh horses sharply decreased in numbers, due to civil and ethnic wars in the region. Most Karabakh horses are now bred in Azerbaijan's Sheki region, and thereare now less than 1000 examples of the breed in the world.