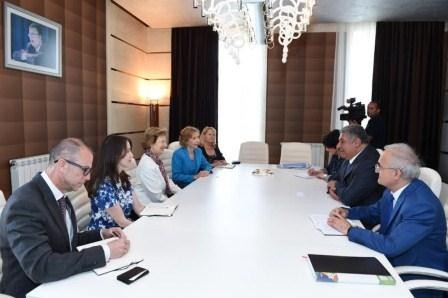 Azerbaijan's achievements in the fields of youth and sports were hailed as the country's Minister of Youth and Sports Azad Rahimov has met with British Prime Ministerial Trade Envoy Baroness Nicholson and Vice-President of German Sport University Cologne, Professor Christoph Breuer.

In his meeting with Baroness Nicholson, the Azerbaijani Minister gave detailed information about the work done in the fields of youth and sports, the Olympic sports complexes operating in the country, youth facilities, as well as the non-governmental youth organizations.

Baroness Nicholson expressed their readiness to cooperate with Azerbaijan in the fields of youth and sports. She particularly praised the projects for people with physical disabilities the Azerbaijani government implemented in a variety of fields and their involvement in the Formula 1 European Grand Prix. Baroness Nicholson said they were ready for comprehensive cooperation in this area, too.

In his meeting with the Vice-President of German Sport University Cologne Professor Christoph Breuer, Azad Rahimov underlined the changes in the management of the Azerbaijan State Academy of Physical Culture and Sport. The Minister noted that the Academy planned innovations in the Academy's training programs and cooperation with the German Sport University Cologne could yield positive results in this regard.

Professor Christoph Breuer hailed the Academy's reforms and changes which were made in the number and coverage area of the faculties. He expressed his confidence that mutual cooperation between the two countries' sports institutions would yield high results