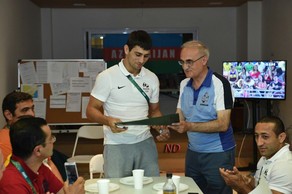 The awarding ceremony of Azerbaijani judokas Rustam Orujov and Orkhan Safarov, who ranked in the judo top eight at Rio 2016, has been held at Rio Olympics Athletes Village, at the headquarters of Azerbaijani delegation.

It was told by spokesperson of the Ministry of Youth and Sports Samaya Mammadova.

Head of the Azerbaijani delegation Ilham Madatov, judokas, coaches attended the event. Ilham Madatov thanked to Rustam Orujov for the first silver medal. He noted that Rustam's win was an incentive and great enthusiasm for other athletes.

In the ceremony, Ilham Madatov presented a souvenir to Rustam Orujov on behalf of the Azerbaijani delegation on the occasion of silver medal win.