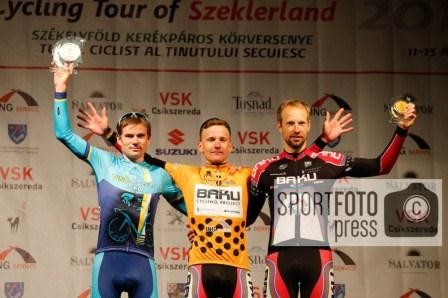 Kirill Pozdnyakov won the overall title in the Cycling Tour of Szeklerland on Saturday. The Synergy Baku Cycling Project dominated the race in Romania, winning three of the four stages. Matej Mugerli won the closing stage and finished third overall, according to the official website of Baku Cycling Project.

In addition Mugerli won the points ranking and the Azeri team won the team ranking.

Mugerli finished in the top three on all four stages – second in the first two stages and third in the time trial before winning the closing stage. He won the bunch sprint of the circuit stage which covered 123 km.

Pozdnyakov set the ground stone for his overall title by winning the mountaintop finish on stage two, by a clear margin. He went on to increase his lead with a commanding win in the uphill time trial and cemented his win with 13th place in the closing sprint.

“The team was just amazing today. Big thanks to everyone and our young guys did such a perfect job. They fight to the end,” said Pozdnyakov. “The mountain stage and the time trial were more about my condition but today wouldn’t have been possible without my team! Thanks a lot to everyone.”

Pozdnyakov, Mugerli and DS Andrej Hauptman all had praise for the team’s young riders in the race. “We did a great job, and the whole team really worked at 100 percent.The young riders fought like lions,” Hauptman said.

“It again proves that all the work behind the team is bringing perfect results, as you can see the young guys developing and getting strong,” Pozdnyakov said. “I’m sure in a few more years they will be able to win international races.”

“The Synergy Baku team did a great job. All young riders amazed Kirill, Andrej and me,” Mugerli said.. “They really raced like old pros. It was really not an easy stage. Hats off to all of them. My victory was only the icing on the cake.”