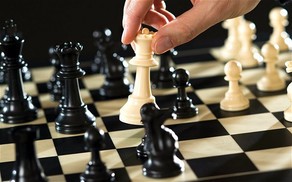 On August 31, US Ambassador to Azerbaijan Robert F.Cekuta met with the visitng U.S. National Chess team and local chess players at the Republican Chess Center in an event to honor the start of the 42nd Chess Olympiad.

It was told in the US Embassy, the Ambassador congratulated Baku for being selected to host the Olympiad and also welcomed the U.S. Team to Baku.

Speaking to a group of chess students, Ambassador Cekuta said that chess builds the important skills of logical thinking. “Chess teaches how to make decisions, trains memory, strengthens will power, motivates children to win, and teaches them how to deal with defeat. These are skills that cross borders, and competitions like this bring players from around the world together,” the Ambassador added.

In the United States, chess has received endorsements by many educators, ranging from Benjamin Franklin to former U.S. Secretary of Education, Terrell Bell.

Ambassador Cekuta acknowledged the hard work carried out by the Government of Azerbaijan and the Azerbaijan Chess Federation to promote the development of chess in Azerbaijan and underscored the importance of such events and exchanges for building ties between our countries. He thanked the Republican Chess Center for hosting him and wished good luck to participants.

The U.S. Embassy is proud to support the American Men’s and Women’s teams at this Olympiad, alongside over 1,600 players from around the globe. The U.S. Men’s team is its highest-rated team ever in the Open competition headed by Fabiano Caruana, Hikaru Nakamura and Wesley So (currently rated number 3, 6 and 7 in the world respectively), who are ably supported by Sam Shankland and Ray Robson. The American team in Baku is the youngest ever for the United States with all players under 30 and the average age 24.

The U.S, Women’s team, led by Irina Krush and Anna Zatonskih who are both rated in the top 40 women in the world, will be seeded sixth and seeks to repeat its tremendous performance in 2008 when it took home bronze.