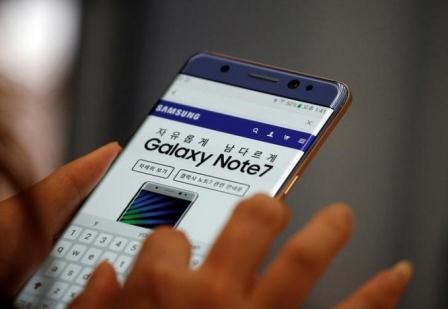 Samsung Electronics Co Ltd has suspended production of its Galaxy Note 7 smartphones following reports of fires in replacement devices, South Korean media said on Monday, a further setback for the tech giant in the midst of its worst ever phone recall crisis.

Axar.az reports referring to Reuters that Samsung's decision to temporarily halt Note 7 production was done in cooperation with authorities in China and the United States, as two U.S. carriers have stopped exchanging or selling new Note 7 phones, Yonhap News Agency cited an unnamed source at a Samsung partner firm as saying.

Samsung did not immediately comment on the Yonhap report.

Problems with replacements for the Note 7 model would create a new and potentially costly chapter to a global scandal which has hurt the reputation of the world's biggest smartphone maker. It also could add new dangers for consumers.

AT&T Inc, the No.2 U.S. wireless carrier, said it will stop issuing new Note 7s to replace recalled phones due to reports of fires from replacement devices that Samsung has said used safe batteries. It will let customers with a recalled Note 7 exchange that device for another Samsung smartphone or other smartphone of their choice.

No.3 wireless carrier T-Mobile US Inc said it was temporarily halting sales of new Note 7s as well as exchanges while Samsung investigated "multiple reports of issues" with its flagship device.

T-Mobile offered customers who brought in their Note 7s a $25 credit on their phone bill.

"Samsung says it is confident in the replacement Note 7 and advises it has no reason to believe it’s unsafe," Telstra said in a statement on its website on Monday.

But major airlines and airport authorities urged passengers to stop using the phone on board.

"In light of recent incidents and concerns raised about Samsung Galaxy Note 7 devices, passengers are strongly advised not to turn on or charge these devices on board aircraft and not to stow them in any checked baggage," Hong Kong International Airport said on its website on Monday.

Singapore Airlines also said on Monday the powering up and charging of Note 7s is prohibited on all its flights.

On Sept. 2, Samsung announced a global recall of 2.5 million Note 7s in 10 markets including the United States due to faulty batteries causing some of the phones to catch fire.

A Southwest Airline flight was evacuated last week after a replacement model Note 7 smartphone began smoking inside the plane, according to the family who owns the phone.

Samsung said on Monday it was investigating reports of "heat damage issues" and would share its findings when the investigation was complete.

"If we determine a product safety issue exists, Samsung will take immediate steps approved by the CPSC (U.S. Consumer Product Safety Commission) to resolve the situation," Samsung told Reuters in a statement.

A South Korean government agency said it was monitoring reports of the fires and repeated a warning from the transport ministry that the recalled Note 7 devices should not be used or charged inside airplanes.

South Korea's two largest mobile carriers, SK Telecom and KT Corp, said they were monitoring the situation but had taken no steps in regards to sales or exchange of new Note 7s.

Samsung shares, which have rebounded after an initial sell-off on the recall, were down 3.5 percent as of 0250 GMT, compared with a flat broader market.

Samsung should be able to recover from the short-term reputational damage of the recalls, but fourth-quarter sales of the Note 7 would be hurt, he added.

Samsung's recall crisis has coincided with pressure from one of the world's most aggressive hedge funds, Elliott Management, to split the company and pay out $27 billion in a special dividend.