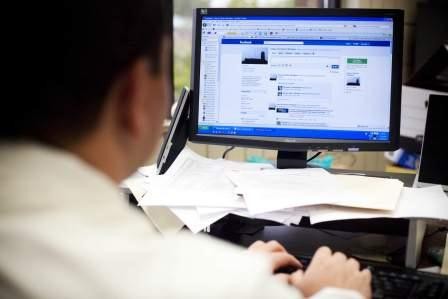 Facebook wants to be one of the only websites you ever need to visit — even when you’re at work.

“Facebook at Work,” the Menlo Park, Calif.’s workplace communications platform, is being piloted at 450 companies as of March 2, the company says. That’s up 50% from six months ago. Previously, around 300 companies had been participating in the trial program.

“Facebook at Work” is a version of the world’s biggest social media network where users interact only with their coworkers. It’s meant to help employees connect and collaborate.

Profiles on “Facebook at Work” are separate from users’ personal pages. But the two platforms offer many of the same characteristics, like the News Feed. Features that get added to Facebook’s primary offering typically make their way to “Facebook at Work” as well.

“Facebook at Work” is still in its early stages. But the company’s ambitions go beyond making just another office communication tool. The firm is aiming to turn “Facebook at Work” into a platform through which employees can access and collaborate over other popular workplace tools, like Microsoft Office and Salesforce.

“That’s currently an ambition,” says Codorniou. “We’re not there yet, but we’re building it”, he added.