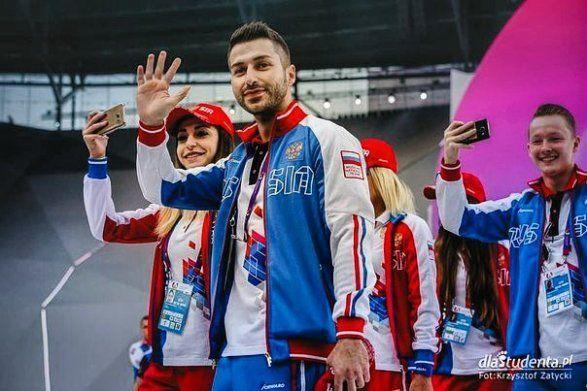 The 11th European Aerobic Gymnastics Championships kicked off at the National Gymnastics Arena in Baku on May 24.

Axar.az reports that the qualifications among juniors in individual programs among women and men in trios, mixed pairs, groups, and aerobic dance will be held on the first day of the European Championships on May 24. The winners in the team competition among juniors will be determined on the same day.

The European Aerobic Gymnastics Championships is being held in Baku for the first time and will last till May 26.

According to the rules, a participant may compete in maximum of three Aerobic categories. In the team competition, the winners will be defined for the five best performances.

The finals among juniors and senior gymnasts will be held on the last day of the competition on May 26.

The athletes from 22 countries are performing at the Championships.

More than 400 athletes will compete in the competition, there are Armenian gymnasts among them who are representing Russia.

Garsevan and Duhik Janazyan, who are competing in the Russian national staff, are now in the capital.

Despite all the security guarantees given by the Azerbaijani government, unlike Arsenal's Armenian footballer Henryk Mkhitaryan, who refused to come to the final of the Europa League in our capital, compatriots came to our country without any problems.

Security has been ensured at a high level in Azerbaijan, Russian athletes of Armenian descent - brother and sister Garsevan and Duhik Janazyan told reporters in Baku.

"We are pleased with everything,” Garsevan Janazyan said. “People are friendly. If we get lost somewhere, we ask people and everyone helps us. We were walking around Baku. Baku is beautiful and the weather is nice. Excellent conditions have been created for athletes in the National Gymnastics Arena in Baku."

The gymnast said that he will perform with his sister on the second competition day of the championship.

"Our competitions will begin on May 25,” Duhik Janazyan said. “The competitions have been organized at a high level in Baku. People are very good, friendly and responsive. Everybody helps us. We were in Baku in 2015 during the first European Games. Everything was great. The sports atmosphere was everywhere.”

“When we performed in Baku in 2015, fans supported us,” she added. “The most important thing for us is to perform adequately at the Championship. Afterwards, the referees will make a decision. The National Gymnastics Arena in Baku is beautiful. Everything is super here: platform, food, accommodation. There are tasty fruits, vegetables in Azerbaijan. The weather is fine. Of course, we also tasted the dishes of national cuisine."

As for Arsenal midfielder Henrikh Mkhitaryan’s refusal to participate in the UEFA Europa League final match in Baku, the gymnasts stressed that the policy and the sports must be separate.