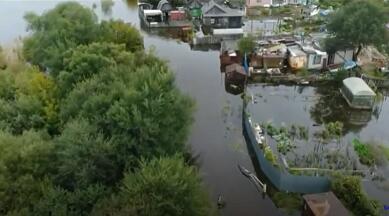 In Russia, in the Far East, the Amur River overflowed.

Axar.az informs that, as a result of the flood, the Khabarovsk region and even the city itself were flooded.

It was noted that in the last day, the level of the Amur rose by another 21 cm and reached 615 cm. The rains continue, and by September 20, the water will rise another 30 cm and approach 650 cm.

So far, 27 settlements and 35 intra-settlement roads, as well as dozens of houses have been completely flooded.

The water level in the streets has risen so high that fish can "swim" in such a city.

We present the video: