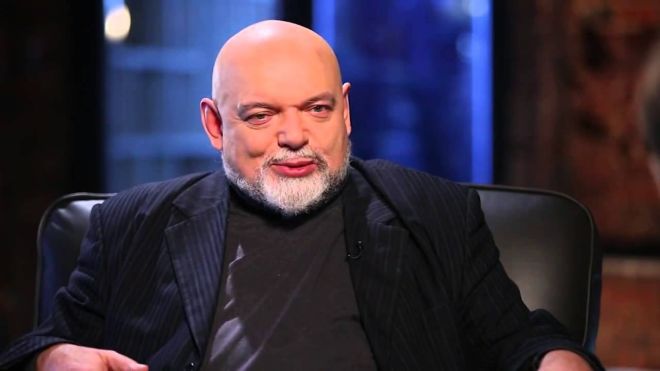 Maxim Shevchenko, a well-known Russian political expert, referred to the views of Heydar Jamal, whom he remembered as a "master and teacher", in his speech on Iran-Azerbaijani relations. He said that even in 2015, Heydar Jamal had expressed Iran's regional policy in detail.

So, what did the late philosopher and public figure Heydar Jamal, who became famous and influential in Russia, say in the speech cited by Maksim Shevchenko?

Axar.az presents some parts of the speech:

"The biggest unjust step of Iran for its close neighbours is its behaviour towards Azerbaijan and its attitude towards Armenia. Tehran's constant support for Yerevan is painful and insulting for 30 million Azerbaijanis living in Iran. Iran supports the Armenians despite their anti-Islamic actions and thereby betrays the Muslim world. Armenia not only takes anti-Islamic steps but also occupies 20% of the territory of Azerbaijan as an aggressor country. Azerbaijanis are wondering why Iran, which has a close historical bond and was ruled by Azerbaijan for many years (remembering the Qajars and Safavids is enough), betrays the Persian-Turkish brotherhood and stands on the side of Armenia - a country that has no history in these territories. They were far from Azerbaijan-Turkey borders. The settlement of Armenians in Yerevan is the result of the mistake of the Musavat Party. Musavat conceded Yerevan to the Armenians (refers to the parliamentary decision of May 29, 1918 - ed.).

How is it possible that Tehran supports Armenians who are enemies of Muslims and Turks? The Armenians who betrayed the Muslims during the Mongolian invasion. They were mediators in the destruction of mosques and the killing of Muslims. I am still not talking about their betrayal of the Turks for the benefit of the West and Russia while being a part of the Ottoman state. For many years, Armenians are the fifth column against Islam. Iranian officials who came to Yerevan say that there is a bond of brotherhood between Persians and Armenians, they are the same nation. In Yerevan, the mosques belonging to Azerbaijan are called Persian mosques and Armenians get thanked for taking good care of them. A series of events are held in Armenia for political instruction. At the same time, against the background of the civil war in Syria, it supports the Sunnis and the Turkmen. The anti-Turkish hysteria in Syria shows once again that Iran shows that it hates the Turks. Iran is committed to the dichotomy implemented by Ferdowsi as the national ideology of Iran - the division of Iran and Turan. According to them, Iran is the kingdom of light, and Turan is the kingdom of darkness. Iran declared itself the enemy of Turan forever.

You can imagine, that in this case, the Armenians are allies of the kingdom of light. For Azerbaijanis, this is not understandable. Azerbaijanis were shocked by such treachery. In fact, the mechanisms of this betrayal and the position of Iran are very simple. Because from Iran's point of view, all the Northern Azerbaijan, Nakhchivan, Karabakh, Sheki, Guba and Iravan khanates belong to it. They do not forget this even for a second. They think that the territories that were taken away by the Turkmenchay Treaty will sooner or later return to the framework of the imperial power of Iran.

Tehran regularly propagates that Northern Azerbaijan is directing its southern compatriots living in Iran to separatism and is trying to unite them with Azerbaijan. This propaganda is intended to cover up Iran's real steps and annex North Azerbaijan. It is the policy of Iranian imperialism. So, that's exactly why they support Armenia against Azerbaijan."

He noted that the revolution in Iran in 1979, was not an Islamic, but a conservative revolution:

"It was just a conservative revolution carried out by clerics. It was a revolution that did not serve the interests of true Islam but served the interests of a religious caste operating under various guises. They were pantheistic castes who were Sufis before the Safavids and later Shias. Their doctrine was “irfan” (philosophy and knowledge). The basis of “irfan” is the Umayyad Sufi scholar Muhyiddin ibn al-Arabi. This has nothing to do with Shiism. This man created the doctrine of "Wahdati-Wujud" (unity of existence) which has nothing to do with the Qur'anic doctrine of the Supreme Creator. Its roots go back to the Greeks, to Platonic philosophy, and this philosophy entered the heart of the Islamic world through the Sufis and still poisons it with these spiritual metaphysics emanating from the Sands. Those who sit on Greek gnosis in Qum and Tehran declare themselves Islamic scholars and mujtahids. In fact, their worldview is not compatible with the "Nahj al-Balagha" consisting of appeals, speeches, and letters of Hazrat Ali, which they consider to be the foundation of the Islamic doctrine and the Shia sect. This is pure pantheism.

Iran's goal is North Azerbaijan. This is the main goal for Iranian imperialism. Just as Crimea is the main target for Russia, Taiwan is for China. Iran is cunning in its policy, it looks "wise". They also maintain good relations with Russia in order to achieve this goal."