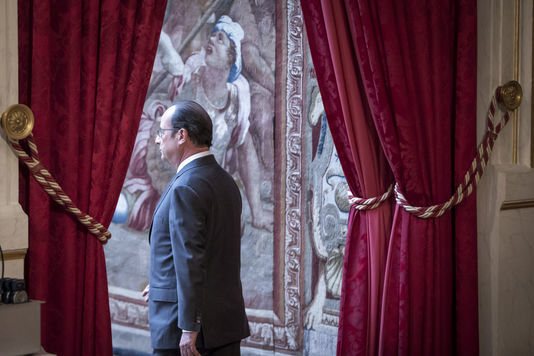 LR MEPs believe that the head of state has failed "to his duties" by disclosing confidential documents to journalists. The procedure has little chance of success.

The impeachment proposal Francois Hollande for disclosure of secret information was passed on Thursday 10 November in the executive by the presidency of the National Assembly. Seventy-nine Members Republicans signed the text.

The socialist president of the Assembly, Claude Bartolone, transmitted to the President and the Prime Minister in accordance with the procedure, a "copy of the proposed resolution text to meet the High Court filed by Christian Jacob and 78 members Assembly " , in letters to the Agency France -press (AFP) had copy Thursday.

The Republicans group (193 members plus six related) explained in a statement that "this motion at the initiative of Pierre Lellouche, is based on serious breaches of his duties shown by President of the Republic, especially in clear violations of secret defense " .
"It expresses our deep conviction that a president must not, can not and simply has no right to any say in relation to his responsibilities as head of state and head of arm ed " is he added.

MEPs aim an article published in Le Monde August 25, titled "The day Obama left falling Holland." He recounted the hours during which France was primed to hit the Syrian end of August 2013. In illustration of the article by Gerard Davet and Fabrice Lhomme, whose sixty interviews with the head of state will lead to the publication October's book "a president should not say that ..." , Le Monde has reproduced a document "confidential defense" with the theoretical place of the intervention.

Among the signatories of the list sent to the executive include in particular former Prime Minister François Fillon and Sarkozy Eric Ciotti. In a longer list provided by the LR group, there are also candidates for the primary right of Nathalie Kosciusko-Morizet and Jean-Francois Cope, the acting president of the party Laurent Wauquiez and the juppéiste Edouard Philippe.

Such a procedure, extremely rare, is allowed only since 2014. This could quickly turn short. The President of the Republic "can be removed in case of breach of his duties patently incompatible with the exercise of its mandate" by Parliament sitting as the High Court states in the article cited in the Basic Law.

The office of the then Assembly deems it admissible "on the form and substance" , had detailed Tuesday Christian Jacob. If the text is acceptable, it will be forwarded to the Committee on Laws. If the committee votes for or against the proposal, the procedure will continue.If the commission does not grasp, it will terminate the proceedings, he detailed.

Bruno Le Maire, candidate for the primary, it refused to join , arguing that it is "the people to impeach" the president. Mr Fillon, a signatory, has admitted that the procedure had "no chance of success because the majority of Parliament is necessary" .