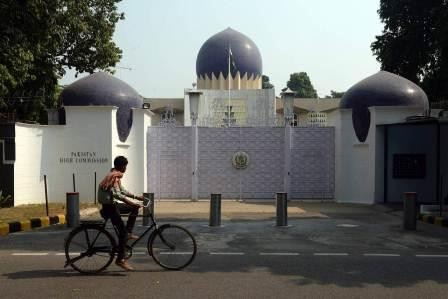 India accused a Pakistani diplomat of spying and ordered him expelled Thursday against a backdrop of heightened tensions between the nuclear-armed neighbors.

Pakistan’s Foreign Ministry said Thursday the allegations were "false and unsubstantiated" and condemned what it called "the detention and manhandling" of the official.

Diplomatic and military relations between India and Pakistan have been deteriorating for weeks after a militant attack on an Indian army base in September that New Delhi blamed on Islamabad.

Indian police said Thursday that Mr. Akhtar, who worked as an assistant to Pakistan’s trade counselor in the embassy in New Delhi, had been recruiting Indian informants for 18 months and obtained from them details about the deployment of security forces on the border, including maps and staffing lists.

Mr. Akhtar was detained Wednesday at a New Delhi zoo where he was collecting "sensitive documents pertaining to national security" from two of his Indian associates, said India’s Foreign Ministry spokesman, Vikas Swarup. Mr. Akhtar—a former Pakistani soldier who reported to the country’s Inter-Services Intelligence agency, according to police—was taken to a police station for questioning and later released after he invoked diplomatic immunity.

Police said they arrested the two Indian men, who they claimed were part of Mr. Akhtar’s network. One is a teacher in a mosque in the border state of Rajasthan and the other is a struggling businessman, according to a senior Indian police official, who declined to provide details on how these men allegedly obtained sensitive documents and information.

The latest diplomatic incident comes as relations between India and Pakistan have become increasingly strained.

India accuses Pakistan of providing training and logistical support to militants who cross the border into India to carry out attacks. Islamabad denies the allegations.

In response to last month’s assault on an army base, in which 19 Indian soldiers were killed, the Indian army launched what it called "surgical strikes" on militants in territory controlled by Pakistan. Islamabad rejected India’s claims, saying Indian troops didn’t cross over to its side. The countries’ heavily militarized frontier has been tense since, as their armed forces have frequently exchanged cross-border fire.

The expulsion of Mr. Akhtar takes place as New Delhi seeks consular access to an Indian man, Kulbhushan Yadav, whom Pakistan arrested seven months ago, claiming he is an Indian naval officer and a spy trying to destabilize parts of the country.

New Delhi has denied that Mr. Yadav was working for the Indian government. India’s Foreign Ministry said he had retired from the navy and ran a business in Iran, from where he may have been abducted. Pakistan has denied Indian requests for consular access to Mr. Yadav, who hasn’t been charged.