Families squat in squalor between frontline and camps 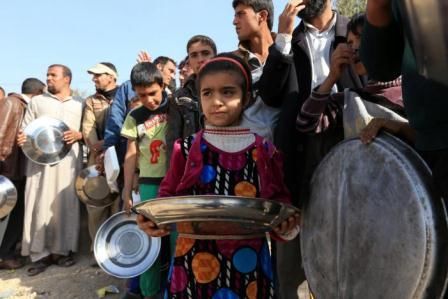 At the small mosque in Shahrezad village, piles of human faeces dot the ablutions room and rubbish is strewn around the garden. Women with infants huddle in the prayer room and dozens of others have slept on thin blankets in the open air.

Fifty people are crammed into an abandoned and bombed-out home nearby, screening off its rooms with sheets for privacy, two days after fleeing fighting in Mosul for this area on its eastern outskirts.

The army says the area is now safe and secure and it is distributing food to the displaced families, most of whom have come from the Intisar district, where Iraqi forces are battling Islamic State in an offensive to recapture Mosul, the militants' last major stronghold in Iraq.

Othman Fadel is not so sure. He yanks his four-year-old son away from a hole in the ground which contains an unexploded shell. The families have marked the spot with two breeze blocks. Earlier this week at least one civilian in Shahrezad was wounded by gunfire.

"We need to get out of here. The frontline is in Intisar, not here, but it's still not safe," he said. "Our living conditions are unbearable. There's food, but that's it - no medical aid, nothing. The children are beginning to get ill."

Fadel's family of seven are desperate to leave the area and head for the Khazir camp some 30 km (20 miles) further east, and where they hope conditions will be better. But they have squatted for two days with no transport, and no way out.

They are among the rapidly increasing number of people fleeing Mosul as camps around the city begin to fill up with the displaced, many of whom have no homes to return to.

The United Nations refugee agency UNHCR says nearly 48,000 people have fled their homes since the start of the U.S.-backed offensive on Mosul last month.

It says hundreds of thousands could be made homeless by what is turning into a protracted urban battle against the ultra-hardline group.

A soldier in Shahrezad said he was confident the battle for Intisar, one of a just a few Mosul districts that Iraqi forces have entered after weeks of fighting, would soon be won.

"It's better that the families stay here instead of going to the camp - that way when we've driven Islamic State out they can go back to their homes," he said.

But many in Shahrezad said their homes were destroyed and having escaped, they did not want to venture anywhere near the frontlines.

"We were caught between shelling from both sides. Sometimes Daesh (Islamic State) would deliberately shell civilians," Fadel said.

"He needs treatment. Maybe in the camp we can start to look for it. We need to go there," Fadel said.

Shahrezad has no working sanitation and parents worry that their children risk infection or disease from the dire conditions.

"The food the army gives out is mostly rice and bread. This child needs baby milk," said Aisha Turki, holding her tiny infant daughter. "She gets cold at night as well, we've no real shelter," Turki said.

The World Health Organisation said on Friday about 70 percent of the newly displaced were living in camps. Thousands of others have holed themselves up where they can, such as the half-destroyed concrete bungalows of Shahrezad.

The United Nations says the number of people fleeing is expected to rise, and is distributing winter supplies as temperatures drop.

Later in the day, several army trucks arrived in the village and families began to climb aboard.

For the next wave of people fleeing Intisar, the squalid Shahrezad will be their home and they will not know for how long.