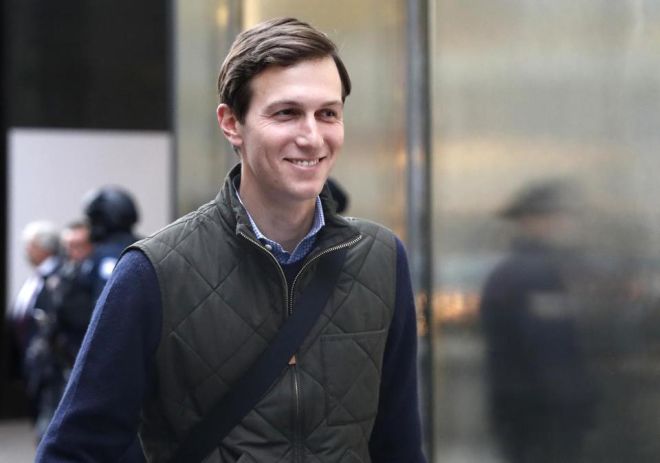 Donald Trump has taken the unprecedented step of requesting his son-in-law, Jared Kushner, receive top-secret clearance to join him for his Presidential Daily Briefings, which began Tuesday.

Multiple sources tell NBC News Trump received his first briefing on Tuesday and designated both Kushner and Ret. Gen. Michael Flynn as his staff-level companions for the briefings going forward.

While Flynn has the necessary security clearance, Kushner does not, and it could take weeks — or even longer — for him to receive it.

It's the latest in a series of unorthodox developments in Trump's transition process that have cast a pall over his first week as president-elect.

On Tuesday, former Rep. Mike Rogers announced he was leaving the transition team, as part of what sources close to the transition process told NBC News was a "purge" of loyalists to New Jersey Gov. Chris Christie, who was demoted from leading the effort last week due in large part to grudges held by Trump and Kushner, sources say.

Naming Steve Bannon, founder and chairman of controversial conservative Alt Right-leaning outlet Breitbart, as a chief strategist in his White House sparked backlash from Democrats and gave Republicans on Capitol Hill a new headache, as many dodged questions about Bannon's controversial comments about minorities, among other things.

And on Tuesday Trump also rolled out his Presidential Inaugural Committee leadership, a list that was packed with many of Trump's biggest donors and fundraisers and as such raised further questions about his pledge to "Drain the Swamp" and rid Washington of corruption.

While it's unclear when Kushner would receive security clearance, the legality of such a move is murky as well, as it raises questions about whether Trump is contravening the anti-nepotism law that bars presidents from appointing family members to cabinet positions or formal government jobs.

But Trump's advisers can argue that the transition team is temporary, and thus not covered by the law. And Trump's own children have indicated they'll continue to advise their father in unpaid, informal roles, which may be outside the purview of the law.

Still, experts note the purpose of the 1967 anti-nepotism statute is to prevent nepotistic favoritism in the wielding of federal power and benefits, so any notion of granting such an important federal power to a non-employee family member contradicts the purpose and spirit of that law, as well as standard practice.

It's unprecedented for a "child or family member" to receive security clearances, said Bradley Moss, a national security lawyer who has held that kind of security clearance and clerked for the National Security Archive.

He added, "You can't hold a security clearance as an informal advisor — there is no such concept."