IS leader Al-Baghdadi is sleeping in tunnels with suicide vest 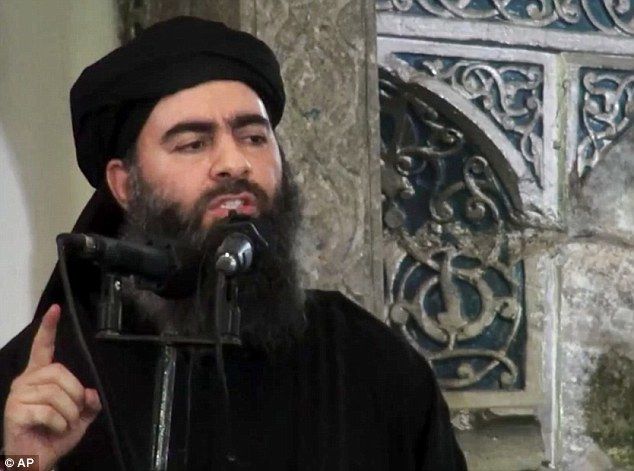 ISIS tyrant Abu Bakr al-Baghdadi is sleeping in tunnels with a suicide vest after becoming increasingly paranoid about his closest team, it has been claimed.

The terror mastermind is cowering beneath besieged Mosul while continuing to send jihadists to their death in the battle for the city, according to an informant.

As paranoia continues to grow within the top ranks of the group, dozens have been executed after being accused of spying. More than 50 were reportedly drowned in cages after SIM cards showed they had been contacting coalition forces.

The information comes after a person inside Mosul started sending text messages to Iraqi military intelligence in Baghdad.
Baghdadi 'has become intemperate,' said the early November message, written by an informant inside the city who has contact with the group but is not a member of it.

'He has cut down on his movements and neglects his appearance,' the message read. 'He lives underground and has tunnels that stretch to different areas. He doesn't sleep without his suicide bomber vest so he can set it off if he's captured.'

The text message, which Reuters has seen, was one of many describing what was happening inside ISIS as Iraqi, Kurdish and American troops began their campaign to retake the group's northern Iraqi stronghold of Mosul.

The texts, along with interviews with senior Kurdish officials and recently captured ISIS fighters, offer an unusually detailed picture of the extremist group and its leader's state of mind as they make what may be their last stand in Iraq.

The messages describe a group and its leader that remain lethal, but that are also seized by growing suspicion and paranoia.

Defectors or informants were being regularly executed, the person texted.

Baghdadi, who declared himself the caliph of a huge swathe of Iraq and Syria two years ago, had become especially suspicious of people close to him. 'Sometimes he used to joke around,' one text said. 'But now he no longer does.'

While Reuters has verified the identity of the informant who has been texting Iraqi military intelligence, the news agency couldn't independently confirm the information in the messages.

But the picture that emerges fits with intelligence cited by two Kurdish officials - Masrour Barzani, head of the Kurdistan Regional Government's (KRG) Security Council, and Lahur Talabany, who is chief of counter-terrorism and director of the KRG intelligence agency.

Talabany and other intelligence chiefs said the military coalition is making slow but steady progress against ISIS.
The coalition has formidable assets inside Mosul, they said, including trained informers and residents who provide more basic surveillance by texting or phoning from the city's outskirts. Some of the informants have families in Kurdistan whom the KRG pays.
The Kurds believe that the military assault on Mosul, which began on October 17, is fuelling ISIS's sense of fear and mistrust.
In the short term, they said, the group's obsession with rooting out anyone who might betray it may help rally fighters to defend Mosul.

But the obsession also means the group has turned inwards right as it faces the most serious threat to its existence in Iraq since seizing around a third of the country's territory in the summer of 2014.

The number of executions is a clear sign ISIS is beginning to hurt, said Karim Sinjari, interior minister and acting defence minister with the KRG, which controls the Kurdish area in northern Iraq.

As well, he said, many of the group's local Iraqi fighters lack the 'strong belief in martyrdom that the jihadis have.'

'Most of the die-hard Islamists who are fighting to the death are foreign fighters, but their numbers at the frontline are less than before because they are getting killed in battle and in suicide attacks,' he said.

Barzani said the growing paranoia has pushed Baghdadi and his top lieutenants to move around a lot, further hurting the group's ability to defend the city.

If the military coalition does push ISIS from Mosul, the Kurdish officials said, the group is likely to flee to Syria, from where it will pose a nagging threat to Iraq through regular suicide attacks and other guerilla tactics.

ISIS has always been paranoid. Its rule in Syria and Iraq has relied in large part on a vast intelligence network that uses everyone from children to battle-hardened former Baathists to spy on both subjects and its own officials.

That paranoia appears to have reached new levels as ISIS's enemies advance. Suspicion grew in the weeks before government troops began to encircle Mosul in mid October.

Early last month, ISIS leaders uncovered an internal plot against Baghdadi, according to Mosul residents and Iraqi security officials.
Hatched by a leading ISIS commander, the plot was foiled when an ISIS security official found a telephone SIM card that contained the names of the plotters and showed their links to US and Kurdish intelligence officers.

Retribution was brutal. SIS killed 58 suspected plotters by placing them in cages and drowning them, according to residents and Iraqi officials.

Since then, ISIS has executed another 42 people from local tribes, Iraqi intelligence officers said. Those people were also caught with SIM cards.

Possession of SIMs or any form of electronic communication now amounts to an automatic death sentence, according to residents in ISIS areas.

The group has set up checkpoints where its militants search people, and regularly mount raids on areas hit by U.S. air strikes because ISIS officials assume locals have helped to identify targets.

The informant texting from Mosul is aware of the dangers. 'I am talking to you from the rooftop,' began one recent message. 'The planes are in the skies. Before I go back down I will delete the messages and hide the SIM card.'

ISIS relies on a network of child informers, the so called ashbal al khilafa or 'cubs of the caliphate.'

'These young boys eavesdrop and find out information from other kids about their fathers, brothers, and their activities', said Hisham al-Hashemi, an Iraq government adviser and ISIS expert. 'In every street there are one or two ashbal al khilafa who spy on the adults.'

The huge network of informants also hurts ISIS, according to Lahur Talabany, chief of counter-terrorism for the KRG. Overwhelmed by information, the group is devoting a lot of its energy to its own people rather than its enemies. That fuels further paranoia.

'There are regular (internal) plots against Baghdadi' Talabany told Reuters. 'We see incidents like that on a weekly basis, and they take out their own guys.'

Until a few months ago, Talabany said, he had a mole inside Baghdadi's inner circle: an ISIS commander who had once belonged to al-Qaeda.

'He was a Kurd born in Hawija', the Kurdish spy chief said, declining to name the man. 'He was one of my detainees. I released him a year before Daesh (ISIS) arrived.'

After ISIS seized Mosul, the commander-turned-agent infiltrated the group and was made a military officer. From that position, he began feeding the Kurds 'valuable daily information.'

The agent told Talabany that Baghdadi consulted closely with top aides, including Saudis who he said were experts on Sharia law. Saudi Arabia has said that there are Saudi nationals in ISIS.

'He told me Baghdadi has got charisma, and has connections, but that he is a front. And that the committees around him take the main decisions, even on the military side,' Talabany said.

The agent told Talabany he had met Baghdadi a few times and was plotting to kill the ISIS leader. But before the commander could act, ISIS discovered he was working as an agent. A few months ago, Talabany said, ISIS publicly executed him.

The group's brutal methods were recounted in a rare interview with two captured ISIS fighters last week. Reuters met the fighters at a Kurdish counter-terrorism compound in the town of Sulaimaniya. A Kurdish intelligence official and an interrogator sat in on the interviews but did not interfere.

Ali Kahtan, 21, was captured after he killed five Kurdish fighters at a police station seized by ISIS in the northern town of Hawija.
Kahtan's path to militancy began at the age of 13, he said. He became a member of al Qaeda and then joined ISIS when a friend took him for religious lessons and military training at a Hawija mosque. The training, he said, involved learning how to use a machine gun and pistol. Trainees were also shown how to cut someone's throat with the bayonet from an AK-47.

Kahtan said that a year ago, a local emir ordered him to cut the throats of five Kurdish fighters. The emir stood over him while he did it, he said.

'One after the other with a knife, a Kalashnikov blade, I did it. Really, I felt nothing.' Afterwards, he said, he returned home. 'I cleaned up and sat down to have dinner with my parents.'

Kahtan said ISIS fighters no longer talk about taking over Baghdad, but focus solely on Mosul, and how to recruit more fighters to protect it.

A second detainee, Bakr Salah Bakr, 21, who was caught as he prepared to carry out a suicide attack in Kurdistan, said ISIS initially tried to recruit him through Facebook to join the fight in Mosul. They are desperate for Iraqi fighters, he indicated, because the influx of foreign fighters dried up after Turkey slowly closed its borders a year ago.

Iraqi intelligence officials say they believe Baghdadi is not in Mosul but in al-Ba'aj district, a bedouin town on the edge of Nineveh province, which borders Syria. Ba'aj has a population of about 20,000 and is dominated by extremists loyal to ISIS.
The area is heavily fortified, with long tunnels that were built after the fall of Saddam when the town became a staging post for smuggling weapons and volunteers from Syria into Iraq.

Even if Mosul and Baghdadi fall, said Kurdish counter-terrorism chief Talabany, ISIS is likely to persist. 'They will go back to more asymmetric warfare, and we will be seeing suicide attacks inside KRG, inside Iraqi cities and elsewhere.'

Security chief Barzani agreed. 'The fight against IS is going to be a long fight,' he said. 'Not only militarily, but also economically, ideologically.'

Barzani, who is the son of veteran Kurdish leader and KRG President Masoud Barzani, estimated there are around 10,000 ISIS suicide bombers in Iraq and Syria. He said ISIS had prepared waves of fighters it was now deploying to defend Mosul.