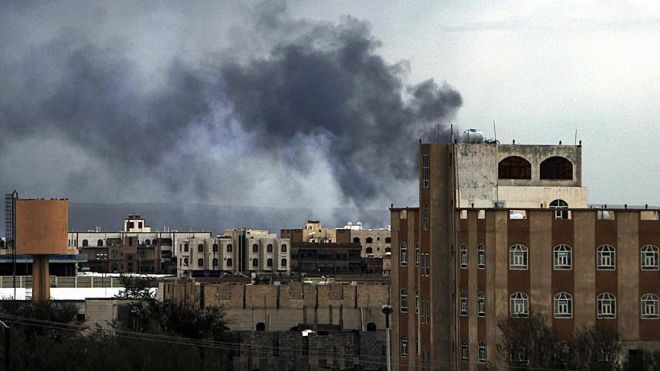 A Saudi-led Arab coalition on Monday announced the end of a 48-hour truce with Yemen’s Shia Houthi group and its allies.

"The truce ended and will not be extended," coalition spokesman Ahmed Asseri said in remarks broadcast by Saudi Arabia’s Al-Arabiya television channel.

At midday Saturday, coalition spokesmen declared a 48-hour truce in Yemen, which -- they said -- would be automatically extended if its terms were respected by the Houthis and allied forces loyal to former Yemeni President Ali Abdullah Saleh.

The two-day truce period, however, reportedly witnessed a series of violations for which each side blamed the other.

What’s more, according to Asseri, the Houthis failed to send representatives to the Saudi city of Dhahran al-Janoub in line with the terms of the truce agreement.

Both the coalition and Yemen’s Saudi-backed government accused the Houthis of committing more than 450 truce violations.

Houthi spokesmen, for their part, said the coalition had violated the ceasefire 114 times.

Although the truce coincided with a slight decline in hostilities, fighting continued -- as usual -- in Yemen’s central city of Taiz, while the coalition continued to strike targets in and around Sanaa, Yemen’s Houthi-held capital.

The collapse of the truce is likely to end the Muscat Agreement, which was brokered earlier by outgoing U.S. Secretary of State John Kerry.

The agreement had called for a cessation of hostilities until a fresh round of peace talks could begin later this month with a view to establishing a unity government.

Yemen has been racked by chaos since late 2014, when the Houthis and their allies overran Sanaa and other parts of the country, forcing President Abd Rabbuh Mansour Hadi and his Saudi-backed government to temporarily flee to Riyadh.

Two previous rounds of peace talks failed to resolve the conflict, in which thousands of Yemenis have reportedly been killed and an estimated 2.5 million forced to flee their homes.